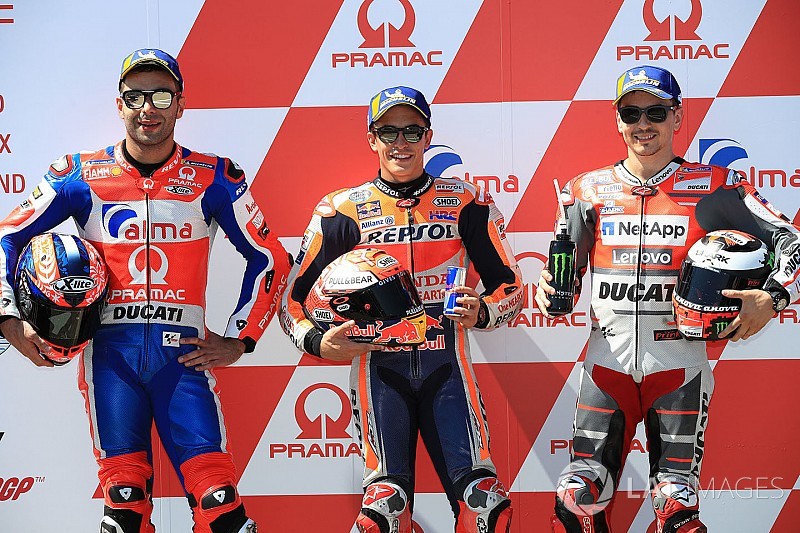 Marc Marquez took his ninth consecutive pole position at the Sachsenring in a thrilling MotoGP qualifying as Danilo Petrucci and Jorge Lorenzo both ended up less than a tenth away.

Marquez was only third after the first set of flyers as Maverick Vinales led the way, his 1m20.441s two thousandths of a second better than Lorenzo's effort in second.

During the mid-session lull, Marquez stayed out for an extra flyer and while he managed to slightly improve, he was still third, 0.089s adrift.

When the second runs began, Lorenzo and Danilo Petrucci were first to improve as they moved up to first and second, the Pramac Ducati rider taking the lead with a new lap record of 1m20.295s.

Marquez's first attempt was good enough to slot between the Ducati duo, but his effort was thwarted by an impressive save at the Turn 3 right-hander.

The Honda rider had time for one last lap and he improved just enough to steal first place from Petrucci, beating him by 0.025s with a 1m20.270s.

Lorenzo was third, 0.057s adrift Marquez, while Vinales didn't improve in his second run and had to settle for fourth on the leading Yamaha.

He will share the second row with Ducati's Andrea Dovizioso, who had to fight his way through Q1, and his teammate Valentino Rossi.

Alvaro Bautista and Dani Pedrosa completed the top 10 as Alex Rins and Takaaki Nakagami rounded out the order in Q2.

Dovizioso and Johann Zarco were the biggest names to take part in Q1 but it was Aprilia's Aleix Espargaro leading the way before the mid-session pitstops.

But Dovizioso, who was only 0.02s slower than Espargaro, went three tenths quicker and topped Q1 with a 1m20.751s.

Espargaro couldn't improve his time and in the end had to settle for third as he was outpaced by the second LCR bike of Nakagami by 0.009s.

The Aprilia rider will only start the German GP from 19th as he received a six-place grid penalty for impeding Marc Marquez in FP3.

Zarco was only fourth in Q2 and will start 13th, ahead of Pramac Ducati's Jack Miller and KTM duo Pol Espargaro and Bradley Smith.

Local rider Stefan Bradl, who is standing in for the injured Franco Morbidelli, was 11th and will line up on the grid in 21st, one place ahead of Marc VDS teammate Tom Luthi.

Espargaro handed another penalty for blocking