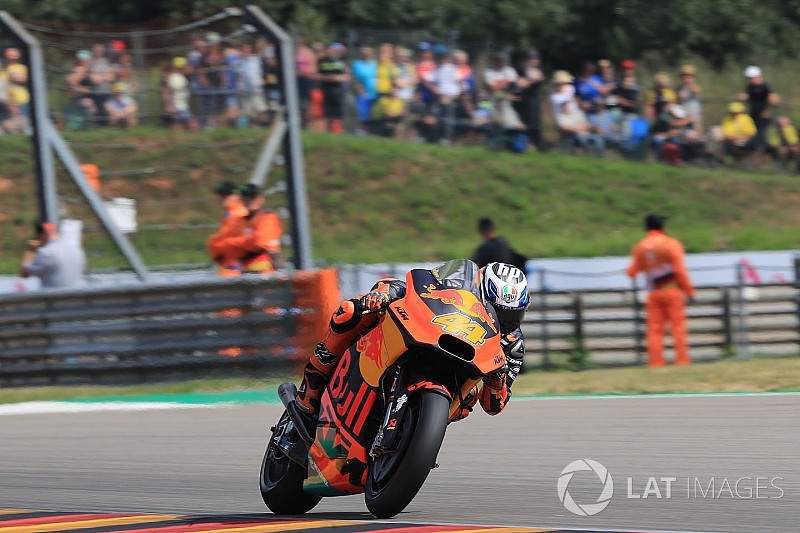 KTM MotoGP rider Pol Espargaro topped Sunday morning's warm-up session for the German Grand Prix, which was interrupted by a major crash for his brother Aleix.

The elder of the Espargaro brothers had just knocked Jorge Lorenzo off the top of the times when he suffered a big off at Sachsenring's Turn 4 left-hander seven minutes into the session.

He hit the air-fence with speed, and while able to walk away, the Aprilia rider looked to be in pain as he was taken to the medical centre, having reportedly suffered a blow to his ribs.

After a brief delay to repair the barrier, poleman Marc Marquez bettered Espargaro's time to go quickest with a 1m21.397s, with Pol soon moving up to second, a tenth behind.

Andrea Dovizioso left it late to move up to third on the best of the Ducatis, demoting the satellite Nieto machine of Alvaro Bautista down to fourth.

Aleix Espargaro's best time was good enough for fifth despite his crash, ahead of Andrea Iannone on the lead Suzuki and Lorenzo.

Yamaha pair Valentino Rossi and Maverick Vinales and the leading LCR Honda of Takaaki Nakagami completed the top 10, the latter just edging out the second works bike of Dani Pedrosa.

Nakagami's teammate Cal Crutchlow could do more than 16th, a little under a second off the pace.

Espargaro out of German GP after crash