Fabio Quartararo blew his own Sepang lap record away as he gapped the field by an incredible six-tenths in FP2 for the Malaysian Grand Prix. 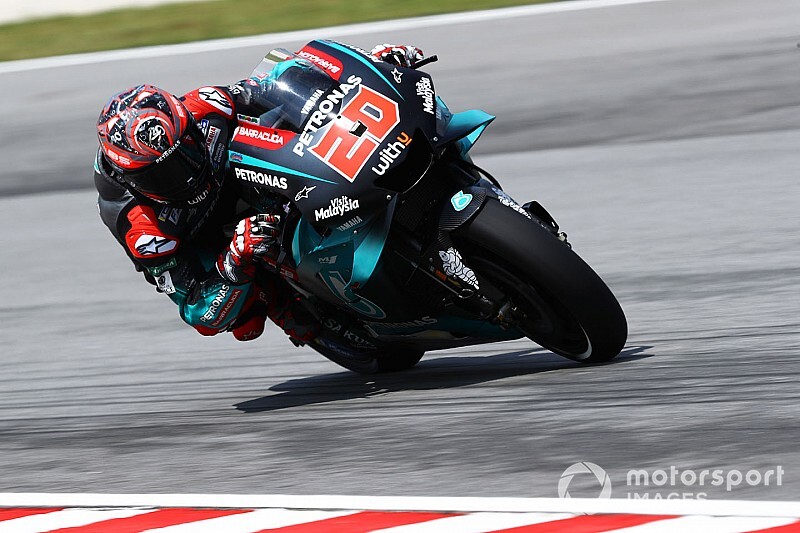 Having lowered the official MotoGP benchmark to a 1m59.027s this morning, the Frenchman was in record-breaking form again in second practice.

Not only did he become the first rider under the 1m59s on a race weekend, he did it comfortably with a stunning 1m58.576s.

With Andrea Dovizioso six-tenths back with a 1m59.206s, Quartararo now has the two fastest laps at the Sepang circuit to his name.

Valentino Rossi and Franco Morbidelli capped off a promising day for Yamaha, finishing up third and fourth after running fresh soft rears late in the session.

Jack Miller was fifth, despite being over a second off the pace, followed by Aleix Espargaro and Cal Crutchlow.

Francesco Bagnaia was eighth quickest, however his 1m59.774s wasn't good enough to leave him sitting on an automatic passage to Q2.

Maverick Vinales ended up back in ninth, the Yamaha rider having been fastest with just 12 minutes to go. He was first into the 1m59s too, only to be swamped by the late pack of late improvers.

Another rider that failed to make an impact late in the session was early pacesetter Marc Marquez. The world champion set to his best lap, a 2m00.215s, just 12 minutes in, before sinking to 13th by the finish.

He's still sitting in a Q2 spot, though, thanks to his FP1 time.

Miguel Oliveira, meanwhile, was a no-show in that session, the Tech 3 rider out for the remainder of the weekend after struggling with his Phillip Island injuries in this morning's first practice.

Quartararo to race factory-spec Yamaha in 2020

Oliveira faces surgery dilemma after pulling out of Sepang