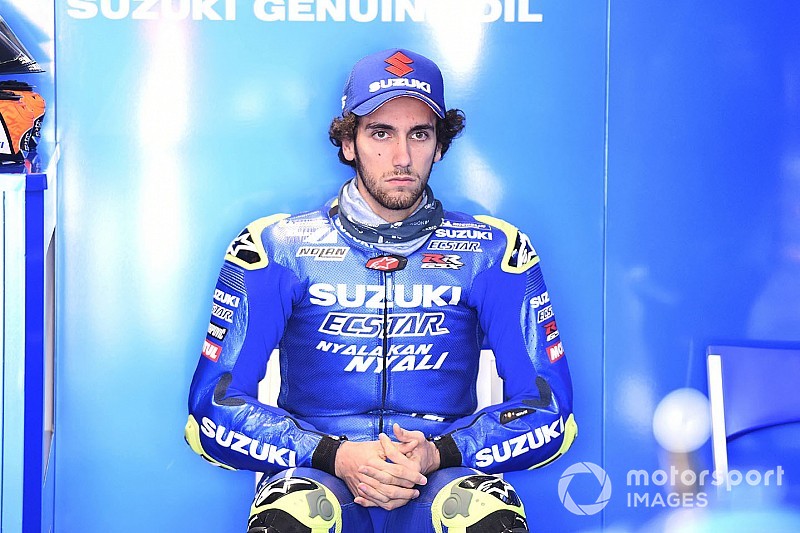 Suzuki MotoGP rider Alex Rins led the way in second practice for this weekend's Malaysian Grand Prix, beating world champion Marc Marquez by a little under a tenth of a second.

Marquez spent the opening half of the afternoon session on top, and until the final five minutes he was the only rider from the top 10 in first practice to improve his best time.

That all changed when Pramac Ducati man Jack Miller again became the first rider to dip beneath the two-minute mark with a best lap of 1m59.771s, which was then eclipsed by a 1m59.701s from Marquez.

But Rins, having just slotted into second behind Miller, was able to find even more time on his final flying lap, turning in a 1m59.608s to best Honda rider Marquez by 0.093s.

Miller's time was enough for third place, 0.163s off the pace, ahead of Phillip Island winner Maverick Vinales on the best of the Yamahas and the second Pramac Ducati of Danilo Petrucci.

Valentino Rossi enjoyed a spell at the top of the times in the second half of the session prior to Miller's improvement, and in the end was sixth-fastest, failing to improve on his best effort from Friday morning.

That time still left him fourth in the combined timesheets, behind Rins, FP1 pacesetter Andrea Dovizioso (who was only seventh-fastest in FP2) and Marquez.

Johann Zarco (Tech 3 Yamaha) and Andrea Iannone (Suzuki) retained their places in the top 10 overall by ending up eighth and ninth, but Dani Pedrosa (Honda) was left outside the cut-off despite being 10th fastest in FP2.

Instead, Aleix Espargaro (Aprilia) remains 10th overall by virtue of his FP1 time after a session in which he finished 19th.

His teammate Scott Redding was the only rider to crash, doing so early on at Turn 2, although Marquez saved a lurid slide at Turn 15, the final corner, not long after.

Jorge Lorenzo continued to struggle on the second of the factory Ducatis, as he elected to continue running despite ending up slowest of all in first practice.

The Spanish rider failed to improve on his FP1 time, completing only nine laps, and was once again last, 5s off the pace.