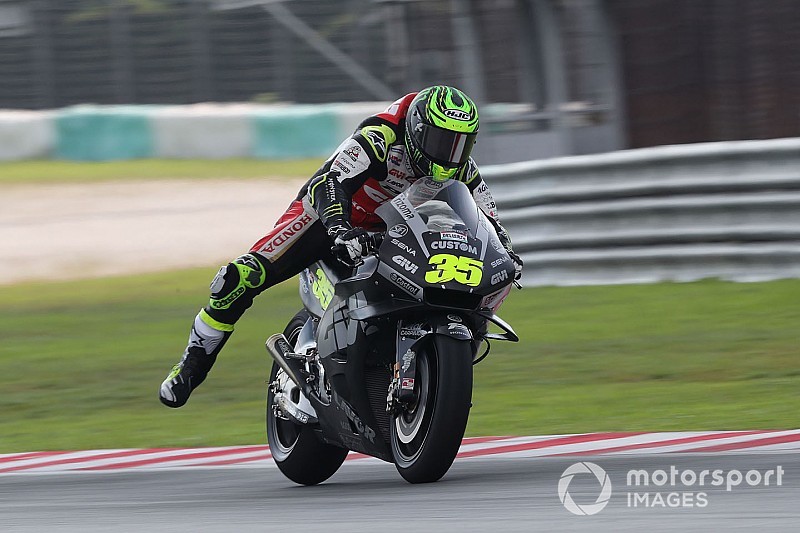 LCR Honda rider Cal Crutchlow says he is pleased with his return to riding in the MotoGP pre-season test at Sepang following a three-month injury break.

Crutchlow broke his right ankle in a heavy crash at Phillip Island, and was ruled out for the rest of 2018 as he underwent multiple surgeries.

The Briton made his MotoGP return this week at Sepang and while his ankle hasn't healed perfectly yet, Crutchlow said he was not bothered by it while riding.

He ended up as the fastest Honda in sixth on Friday, beating both his LCR stablemate Takaaki Nakagami and the likewise injured Marc Marquez by nearly four tenths.

"Overall I am pleased with how the three days have gone, I couldn't have asked for a better three days," said Crutchlow.

"My ankle is getting sore and hot and swollen but I feel in good shape. Better than expected. I feel the ankle is in good shape it doesn't bother me on the bike, it bothers me when I stop.

"It's still slow, I'm slow to move my foot around the rear brake and the peg but I feel in good shape considering I had three months off the bike.

"Don't get me wrong, I feel like I've been hit by a bus every morning that I get up."

Crutchlow added that he could have been "a lot faster" if not for a mistake on his fast lap and then a subsequent crash at Turn 5.

"I should have gone a lot faster but I crashed, it was completely my own fault, I went into Turn 2 overexcited," he said.

"I lost three tenths in the first sector of my fastest lap, compared to a good lap, so the next lap I push like a madman thinking I need to go like half a second faster.

"I had some chatter and I crashed. That was with the really soft tyre and I think on average you could take about six to eight tenths off so I comfortably could have gone a lot quicker."

Crutchlow added that he is yet to get comfortable with the 2019-spec Honda, which is partly due to his injury, and a different front-end feeling.

"Maybe I have to also adapt but I don't feel comfortable in one area or another. With the Honda we crash a lot in the braking zone and we overstress the front.

"My front end feeling is the completely opposite, I feel like I don't have the load like last year so maybe they have improved and I need to also adapt."