Ben Spies has shocked the motorsports world by announcing his retirement from racing following nearly two torrid years with shoulder injuries that has ultimately forced the American rider to take the biggest decision of his life and retire at the age of just 29.

The time has come to stop and I do so with great sadness.

Many believed Spies was on the road to recovery this year and he and his Pramac Racing squad was hopeful of him returning to racing in the 2014 championship. However an official announcement was issued by Ducati Motor Holding regarding decision made by Spies and the company.

When making the announcement Ducati said that a joint decision was made to release Spies from any further contractual duties. “The resulting operations on both shoulders have left Spies feeling that his physical ability to ride next year remains in question and a decision was jointly made by Ducati and Ben to release Ben from any requirement to race in 2014,’ the statement reads. 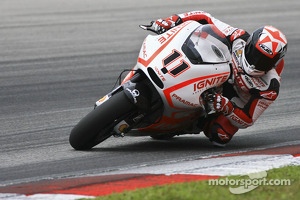 Naturally devastated to be making the ultimate decision on his future, Spies was sad to be retiring early but thanked all his fans and those who helped him throughout his career that saw him win 3 AMA Superbike titles, the World Superbike Championship in 2009 and his ultimate graduation to Moto GP in 2010 with Monster Yamaha where he earned the Rookie of the Year title and when he won his first MotoGP Race at Assen in 2011.

Making the announcement Spies said, “I had such high hopes for racing for Ducati and Ducati has been incredibly supportive of me during this challenging year, so I am tremendously disappointed that I have not been able to fulfill my personal goals and team goals with Ducati. I want to thank everyone from racing organizations, factories, teams and all my fans for helping me and supporting me throughout my career. I never dreamed that I would reach the level of success that I have over the past 20 years of racing, but the time has come to stop and I do so with great sadness.”

Spies’ mom Mary is also hi long-time manager and she made a short statement thanking all the people who have supported her son throughout the years. She said, “Wherever Ben has raced over the years - from AMA Superbike to World Superbike to MotoGP™ - he has always felt the warmth and appreciation of the organizers, circuits, teams and fans. We are so grateful to them for their support.” 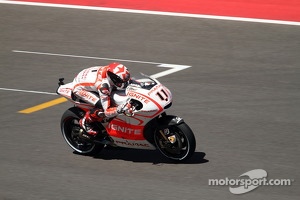 Ducati MotoGP Project Director Paolo Ciabatti was also sad to see Spies and thanked the American for his time and input into the satellite Ducati team. Ciabatti said, “We had high expectations when Ben joined Ducati in MotoGP™ this year and we really hoped that he would fully recover from his Indianapolis crash injuries and continue to race for us in the future However, we understand the reasons for his decision and respect them. It is really a shame for our sport that Ben will not be racing anymore because in our opinion he is one of the most talented riders in the world. We will miss him and wish him all the best for his future life.”
shares
comments
Previous article