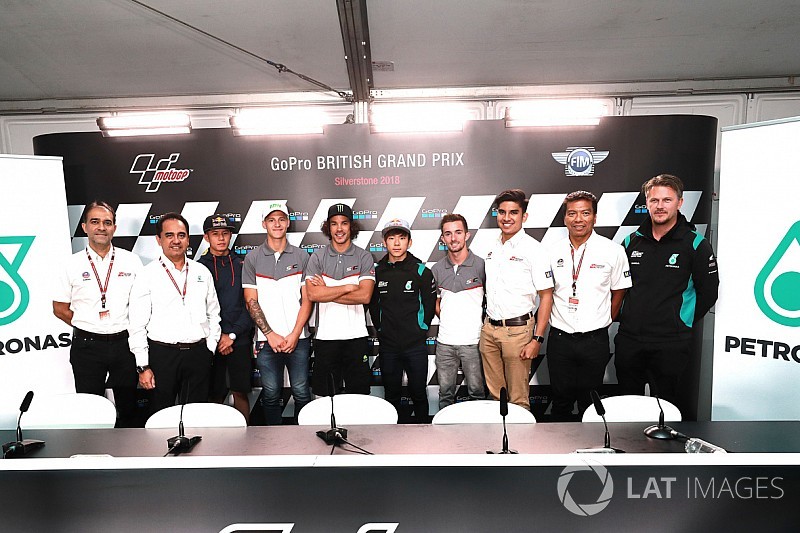 The SIC Yamaha MotoGP team has confirmed it will carry title sponsorship from Petronas in 2019, while officially unveiling Franco Morbidelli and Fabio Quartararo as its riders.

The SIC outfit will replace the Angel Nieto Ducati team on the MotoGP grid next year, and will take over from Tech 3 as Yamaha's sole satellite outfit.

In a press conference during MotoGP's British Grand Prix, it was confirmed that the Sepang-owned team will field Morbidelli and Quartararo next year, and that it will be sponsored Malaysian oil company Petronas.

Petronas Group CEO Wan Zulkiflee said: "This is an extension of our involvement in motorsports. I think we have been involved since 1995 and we've been working with many of the big names in the sport.

"We hope with this involvement, we could also use it as a platform for our research and development in the areas of lubricants and fuels.

"We also hope that we also could provide some competitive edge to the team with regards to the way our fluids technology solution and we are using this experience also what we call 'from the track, to the road'.

"The lessons that we learn from the track will also benefit our valued customers, globally, so essentially that is our motivation of our involvement here."

Azman Yahya, chairman of the Sepang International Circuit added: "The formation of this team completes our motorsport development programme for Sepang.

"We started four years ago with Moto3, moving to Moto2 this year, and within a four-year period we are present in Asian Talent Cup, Spanish CEV, Moto3, Moto2 and MotoGP, it is an unprecedented position for any team in the world.

"For us to realise this dream in short period of time, couldn't be possible without the support of our partners.

"I think this dream of having a MotoGP team is shared not just by us but by millions of Malaysians, the fans.

"We saw as a track owner how the support of Malaysian MotoGP improve over the last few years since we had riders in the lower categories and we expect this year we will surpass last year's crowd record, 150.000 over the weekend.

"I think this is very important for us as track owner."

SIC entered Moto2 for the first time this year, but its original rider Hafizh Syahrin ended up moving up to MotoGP with Tech 3, and neither of his replacements - Zulfahmi Khairuddin and Niki Tuuli - have managed to score a point so far.

For 2019, the team will field Khairul Idham Pawi, who is currently in his second year in Moto2 with the Honda Team Asia squad and is 27th in the standings.

In Moto3, SIC has signed series veteran John McPhee alongside Ayumu Sasaki, who will continue with the team for a third consecutive season.

Mexico will not join MotoGP calendar in 2019