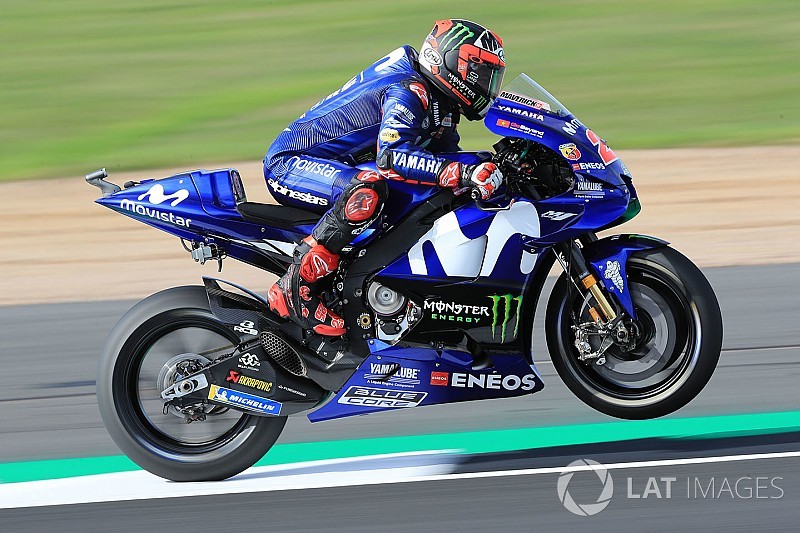 Vinales set the early pace at 2m05.861s, though was soon usurped by home hero Cal Crutchlow, the LCR rider dragging his Honda to a 2m04.692s to go half a second clear.

Pramac Ducati's Jack Miller and Vinales traded top spot moments later, with the former edging ahead by 0.005s with a 2m03.787s.

With just over 13 minutes of the session gone, Marquez notched up the first crash of the weekend despite his best efforts to save it when he tucked the front of his Honda into Brooklands.

At the same time, Miller extended his advantage at the head of the timesheets to 0.081s, before Andrea Iannone put his Suzuki four tenths clear.

Vinales reclaimed top spot at mid distance with a 2m02.713s, his lead close to half a second over the field, though Miller slashed this to just over two tenths with 13 minutes remaining.

Crutchlow took over from Vinales in the latter stages with a 2m02.427s, with 2017 Silverstone winner Andrea Dovizioso demoting the Briton moments later by two tenths.

Early pacesetter Iannone was shuffled back to eighth at the chequered flag, with Johann Zarco putting his Tech 3 Yamaha into ninth ahead of Marquez, who was able to rejoin after his spill in the opening stages.

Ducati World Superbike-bound Alvaro Bautista was two tenths outside of Marquez in 11th, while Bradley Smith opened up his home event in 12th on the KTM.

Countryman Scott Redding encountered an early issue with his Aprilia, but returned to the session on his second bike to go 18th behind the sister works Honda of Dani Pedrosa. Aleix Espargaro also hit technical troubles on his RS-GP late on.

With Smith's teammate Pol Espargaro still out with injury, former MotoGP rider Loris Baz has been called up to replace him this weekend. The Frenchman brought up the rear of the 24-rider field, 4.6s off the pace.

When a MotoGP star tried F1 for size at Silverstone