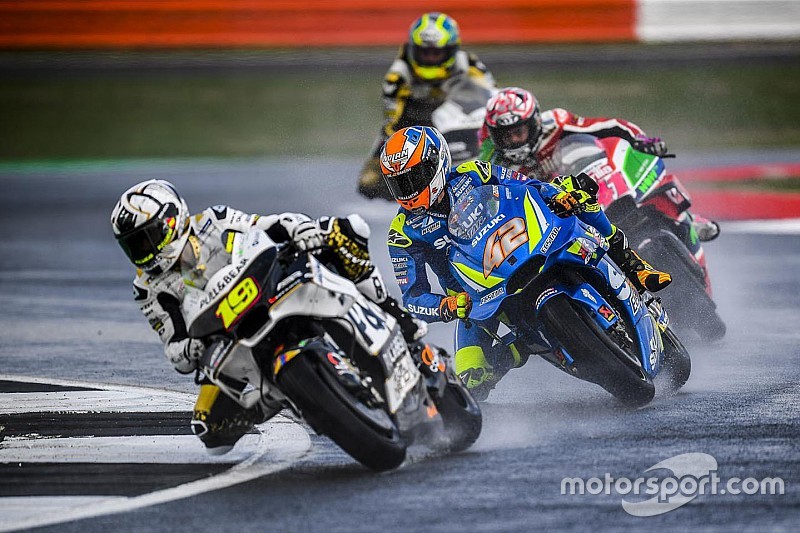 Silverstone has secured a one-year extension to its current MotoGP deal, following the announcement that the circuit will be resurfaced again.

Motorcycle racing's British Grand Prix will now remain on the MotoGP calendar through to 2021 at least.

Plans for the resurfacing of Silverstone were first confirmed back in March, coming as the consequence of the cancellation of the British GP at the venue last year due to rainfall.

The track had already been repaved ahead of the 2018 race, but the new surface was then named as the cause of the cancellation by MotoGP race direction, who insisted that water accumulating on the track was not being drained properly.

Carmelo Ezpeleta, boss of MotoGP promoter Dorna, said another repave was a prerequisite to Silverstone keeping the event past its existing 2020 deal, while it was also understood new resurfacing works were a requirement for the track to retain the FIM Grade A licence required to host the MotoGP race.

As opposed to the previous resurfacing, which was carried out by Aggregate Industries, the new work – set for June – has been delegated to construction solutions company Tarmac.

“Getting to this point has involved a lot of work by the staff at Silverstone but throughout it all we have been completely focused on making sure we make the right decisions to guarantee the future of our most important events with Formula 1 and MotoGP,” said the track's managing director Stuart Pringle.

“We have a globally-renowned company working on the surfacing of the track and we have one of the most respected circuit designers in Jarno Zaffelli [the track designer in charge of the 2016 Sepang resurfacing] working as an expert advisor to Silverstone during the works.

“The extension to the MotoGP contract is excellent news for all of us at Silverstone and allows us to plan long-term for the future development of MotoGP, and all two-wheel action, at our circuit. We look forward to making the MotoGP weekend the best motorcycling event in the UK biking calendar.”

Silverstone has been the venue for MotoGP's Great Britain event since 2010, and while it was slated to lose the race when the Circuit of Wales project signed a five-year deal for 2015-19, the proposed Welsh venue was repeatedly delayed before having its funding plan rejected by the government.

“The extension to the contract at Silverstone is a mark of the confidence we have in the circuit to host a successful MotoGP event over the next three years,” said Ezpeleta.

“Silverstone is one of the most historic of all the MotoGP venues and we have been working closely with Silverstone to ensure the race has a successful future. We will be assisting with any changes that need to be made regarding the track surface after the events of the 2018 MotoGP.”

Silverstone's deal to host its other marquee event, Formula 1's British Grand Prix, runs out at the end of this year, but the circuit has been in negotiations over an extension on that front as well.