Stoner takes his first pole of 2012 at Estoril

Stoner (1m 37.188s) grabbed pole with just 2.5 minutes left in the session after Crutchlow (1m 37.289s) had staked his claim for the head of the front row with 5 minutes left. Jorge Lorenzo (1m 37.466s) led for most of the first 40 minutes at the Portuguese track but the Yamaha Factory Racing man had to settle for a 4th place start and off the front row for the first time this season. Lorenzo heads the second row ahead of his teammate Ben Spies (1m 37.723s) who was unlucky to get held up a number of times during the hour-long session.

It's been a good day for us and I'm really happy to get pole. 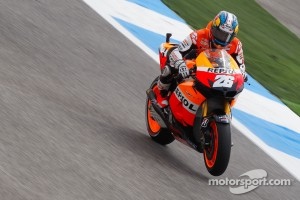 Speed Master CRT rider Mattia Pasini begins tomorrow’s race from 17th with a best lap of 1m 40.387s while Edwards’ best time of 1m 40.964s was enough for 18th place but the American rider is confirmed as having a broken left collarbone after being taken out by De Puniet’s bike. James Ellison sits in 19th for the Paul Bird Motorsport team 1m 41.394s while Danilo Petrucci (Came IodaRacing Project) starts from 20th place tomorrow with a best lap of 1m 41.486s and Ivan Silva bringing up the rear for the Avintia Blusens team (1m 41.490s) following a mistake by the Spaniard during his qualifying session.

Speaking about taking his first pole position of the new 1000cc MotoGP class Stoner said, "In general it's been a good day for us and I'm really happy to get pole. FP3 was positive and we made progress on the bike, we had the bike turning well with good front feeling. Unfortunately in qualifying we tried to improve it further but managed to lose the good points! We did find a little better feeling in the rear but we couldn't get the bike to turn and do what we wanted it to.

We didn't really feel we had the pace to be on pole today, but after the red flag came out with 10 minutes remaining we were able to get out there and put together a good enough lap to take pole. We've been pretty fast in every session and our race pace gives us confidence but we'll have to have a think about which set up direction we go for in warm up and hope this is the best for the race. I was sorry to see Colin has broken his collar bone again and I send him by best wishes," Stoner aded.

Pedrosa is expecting a tough race tomorrow but is pleased with his front row start saying, "I think we did a good job in qualifying and to be on the front row here after all the issues we had is a great thing. I couldn't put too many good laps together because I had some problems on the bike, first with the brakes, then with the electronics and by the end I was feeling good but we had to stop again due to the red flag. I honestly think that in the last minutes of the session I could have taken the pole but there was a lot of traffic and I missed it by just 0.013. The race will be very tough tomorrow because the track conditions are poor, the grip is low and it makes the tyres spin a lot. We will try to set up our bike a little better for tomorrow to do our best in the race." 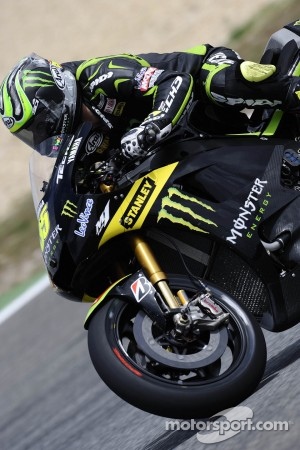 Crutchlow is thrilled with his second front row start in just his second year of MotoGP and is looking forward to the race. “To be back on the front row again is a really great achievement for the Monster Yamaha Tech 3 Team and this is reward again for all of our hard work. I am really happy as well to be the fastest Yamaha because that proves what a good job all of us are doing. I was on the hard tyre for the first part of the session working on the race set-up and it felt a little different to what I am used to, but we made a lot of progress with the bike during the session.

I felt really comfortable and confident on the soft tyre and felt I could be fighting for the front row. I was actually going to scrap my best lap but I made up some time in the last sector and it was good enough for the top three. I'm happy with that but we still have to improve the bike a bit more for the race. I want it to turn a little better and brake a little better. I am looking forward to the race but it is going to be a difficult job. We know Jorge is going to be there and a podium will be very hard but as always I'll try my best," Crutchlow added.