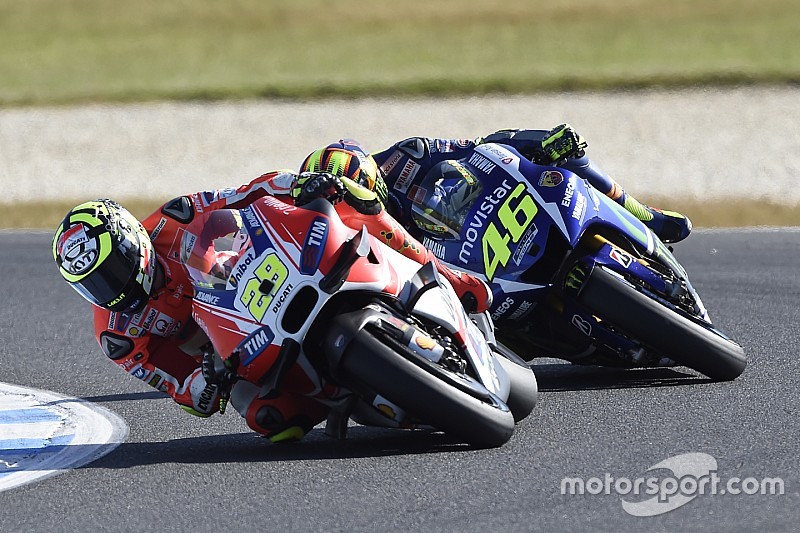 MotoGP legend Valentino Rossi lashed out at the hate directed towards compatriot Andrea Iannone after the Ducati rider beat Rossi to third place at Phillip Island.

But Rossi was magnanimous in defeat and vented his frustrations at the abuse directed towards Iannone on social media by his own fans in the aftermath of the race.

"In reality, [those who attacked Iannone] are not my real supporters," he said. "It’s difficult to follow when you’re not in Italy, so I only heard after the race. It’s a great shame, because these people are very stupid.

"Unfortunately, it’s the age of the social network where everybody can say their idea, even if it’s a very stupid idea.

"People like to speak bad about other guys that are luckier than them, with more talent, and are happier because they do what they love for a living.

"A lot of time on my social networks, you have these stupid people who speak about your life and about your mum, and it’s a great shame because you cannot speak with them; it’s a waste of time.

"I’m very sorry for Andrea, he just did his normal race and he should be trying to beat me."

Iannone himself dismissed whatever negativity there was after the race, accentuating that he gets plenty of support on social media.

"On my Facebook and Instagram I have a lot of comments, but 90 percent of them are positive," he said. "For the negative, I think it's only [their] opinion, and it's a small part compared to the other people.

"I'm happy to have support from the fans and I'm looking forward to this weekend and I'm focussing on these last two races."