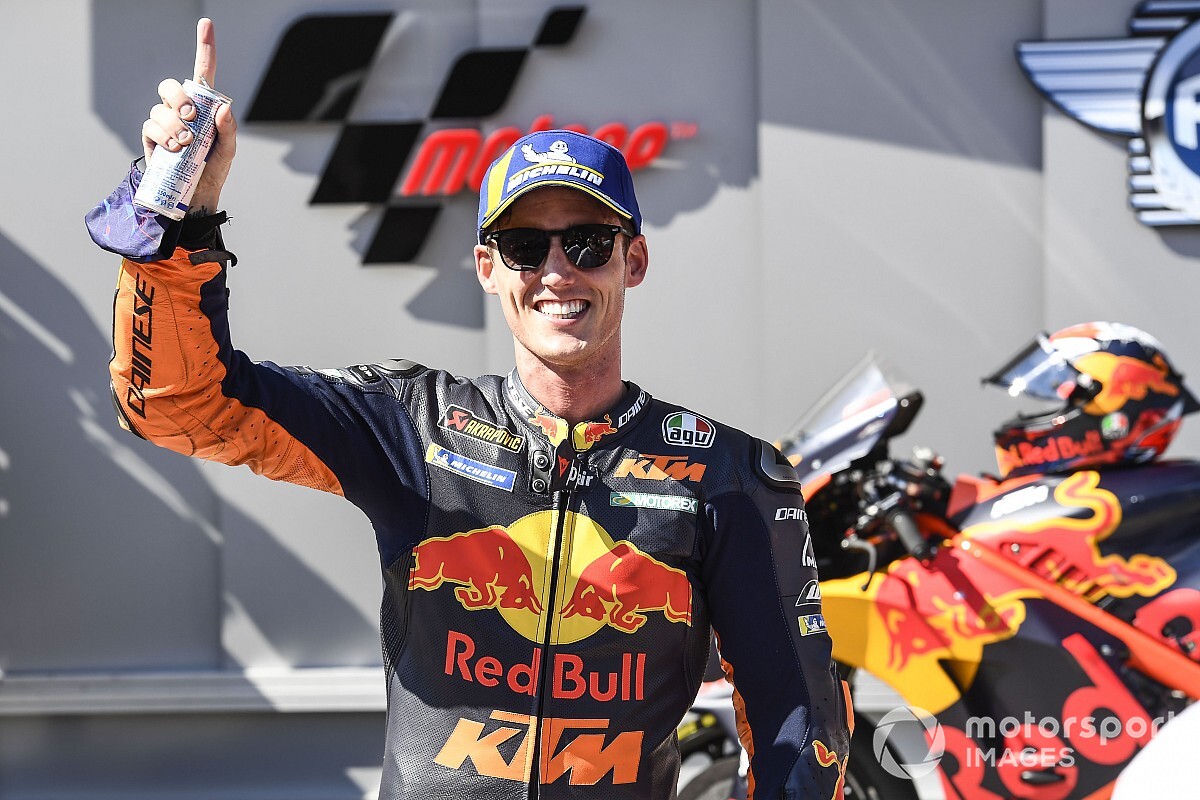 Pol Espargaro stormed to his and KTM’s first MotoGP pole in a frantic Styrian Grand Prix qualifying, while Valentino Rossi was only 15th after a crash.

In a season in which KTM achieved its first win courtesy of Brad Binder, Pol Espargaro gave the Austrian marque its maiden pole in a qualifying session on home soil in which the Q2 order was split by just 0.594 seconds.

Fabio Quartararo set the pace after the opening salvo of laps with a 1m24.479s, with Alex Rins taking over top spot with a 1m24.461s soon after.

Maverick Vinales made his claim to a second-successive Red Bull Ring pole with a 1m24.217s, though this was cancelled for exceeding track limits, which briefly promoted Franco Morbidelli on the Petronas Yamaha to pole.

That was short-lived, however, as Quartararo and then Espargaro shot to the top of the order.

He stayed atop the pile for all of 40 seconds, with LCR’s Takaaki Nakagami setting the benchmark at 1m23.602s on the year-old Honda at the end of the first runs.

The Japanese rider’s time survived until the closing two minutes, when Espargaro dug deep to produce a 1m23.580s to take his first pole since his final Moto2 race back in 2013.

Nakagami put Espargaro’s lap under serious threat on his final effort, but the effort was scrubbed because he exceeded track limits, resigning him to a career-best second.

The injured Johann Zarco came through Q1 having sat out Friday’s running due to being unable to sit his fitness test on his wrist until Friday afternoon following surgery on Wednesday.

Setting the pace in Q1, Zarco stormed to third on his Avintia Ducati, but will be unable to take up that slot on Sunday due to a pitlane start penalty for causing the horror collision with Morbidelli last week in the Austrian GP.

This will promote Suzuki’s Joan Mir to the front row having ended Q2 fourth, ahead of Pramac’s Jack Miller, who was battling pain in his right shoulder from his FP3 crash.

Austrian GP winner Andrea Dovizioso will have work to do from eighth having only qualified ninth, with Quartararo slipping to 10th on his Petronas machine ahead of Morbidelli and Q1 graduate Danilo Petrucci on the Ducati.

Tech 3’s Iker Lecuona was dealt late heartbreak in Q1 when Petrucci dumped him out of a place in Q2 for the first time, the Spanish rookie was just 0.156s outside of progression in the end.

Lecuona did claim some big scalps in fellow KTM rider and Brno race winner Brad Binder, while Valentino Rossi was only 15th on his factory Yamaha after crashing at Turn 9 on a final lap which was set to move him into a Q2 place.

All riders who failed to lift themselves out of Q1 will be promoted a spot on the grid courtesy of Zarco’s penalty.