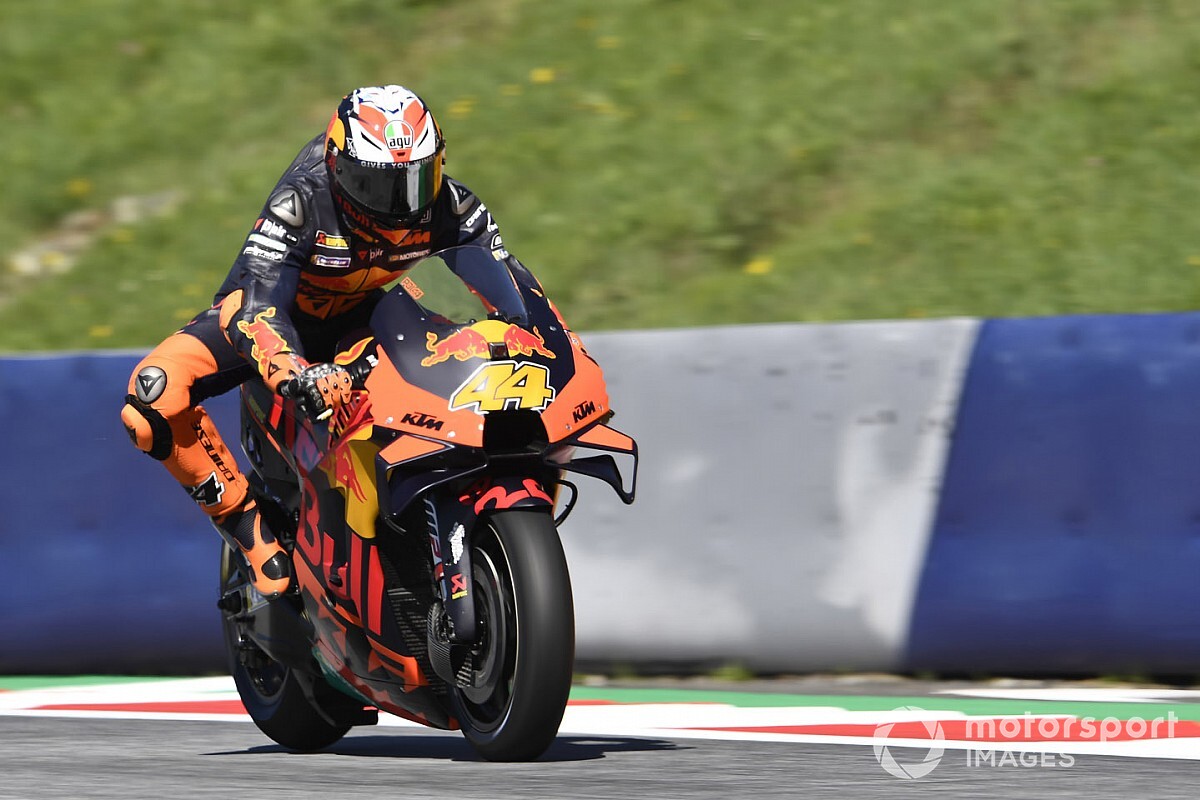 Espargaro’s Austrian GP came off the rails at the restart, with a strong victory chance going walking after he ran out of his preferred medium tyres, while a crash with Tech 3 KTM’s Miguel Oliveira ended his afternoon early.

Showing good pace all weekend during the Austrian GP, Espargaro picked up where he left off by topping the combined timesheets on Friday.

The KTM rider led the early part of the session with a 1m24.301s, which he improved to a 1m24.203s just seven minutes into the afternoon outing.

This stood for some time as race preparation seemed to be the plan for most of the field, though Suzuki’s Alex Rins began lighting up the timing screens when he fitted a fresh soft slick to his GSX-RR with 16 minutes to go.

Rins – who was in contention for victory last week before crashing out – fired in a 1m24.122s to finally depose Espargaro’s time.

As the whole filed went for a time attack in the closing stages, Espargaro re-assumed control at the top of the standings with a 1m23.764s – the fastest time of the day.

The KTM rider improved to a 1m23.638s on his final effort, which went unchallenged through to the chequered flag.

Nakagami guided the year-old Honda to second, 0.266 seconds back, while Austrian GP podium finisher Joan Mir completed the top three on the Suzuki.

He headed teammate Rins, with Maverick Vinales fifth on the factory team Yamaha ahead of Oliveira and Petronas Yamaha's Franco Morbidelli.

Aleix Espargaro was eighth in FP2 on the Aprilia, though is still outside of the provisional Q2 places on the combined times.

KTM duo Brad Binder, who holds a provisional Q2 place currently, and Tech 3’s Iker Lecuona – who does not – rounded out the top 10.

Valentino Rossi is also outside of the provisional Q2 spots currently after ending FP2 in 11th ahead of Honda’s Alex Marquez and LCR’s Cal Crutchlow.

Championship leader Fabio Quartararo cut a frustrated figure again on his Petrona Yamaha, after several offs under braking prompted an angry response from the Frenchman.

He is out of the provisional Q2 places and was 14th in FP2, with Andrea Dovizioso following him in 15th.

Despite not getting into the top 10 places in FP2, both Dovizioso and FP1 pacesetter Jack Miller [17th] do hold Q2 places currently having not fitted a fresh soft tyre in the closing stages this afternoon for a time attack.