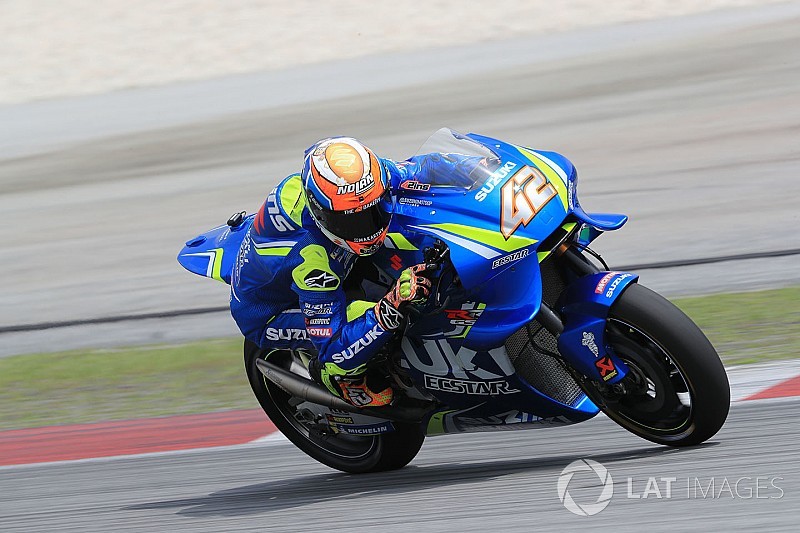 Suzuki has managed to vastly improve the GSX-RR's engine, the team's Achilles heel last year, according to Alex Rins.

A misdirection with engine choice during the pre-season of last year saw Suzuki struggle for much of 2017, with three late-season top-five finishes the only highlight.

Keen to avoid a repeat, Suzuki has focused its efforts on testing its new engine at the opening MotoGP pre-season test at Sepang.

Rins, who ended Monday’s running 13th quickest, has so far found the new unit has improved "in all the areas" where the bike faltered last season.

"What is true is we improved a lot the engine," said Rins.

"Today we focused a little bit on the 2018 package, yesterday we started to try and was really [good] because we found a set-up, and I think we had a good rhythm.

"Today was a little bit of work on the rhythm of the engine, trying to be at 100 percent, to be secure.

"In Japan, they worked really hard this winter, and they improved a little bit in all the areas: in the area of power and a lot in the area of turning that we were missing last year."

Rins said that while trying a new chassis is also on Suzuki's testing programme, they decided to focus solely on the engine in order to avoid making “the same mistake” as 12 months ago.

"We improved a lot the engine. At the moment we just try the engine and set-up, we don't try any chassis.

"We have (chassis testing) on the planning, but basically we don't want to do the same mistake we did last year, so today we focused on the engine.

"We improved a little bit on the electronic parts, but basically the engine does the big step, the big difference.

"Basically, with the electronics, you adjust a little bit the bike, but the important (thing) is the engine.”