Yamaha's Maverick Vinales was fastest on the rain-shortened opening day of the MotoGP post-season test in Valencia as Jorge Lorenzo took 18th on his Honda debut. 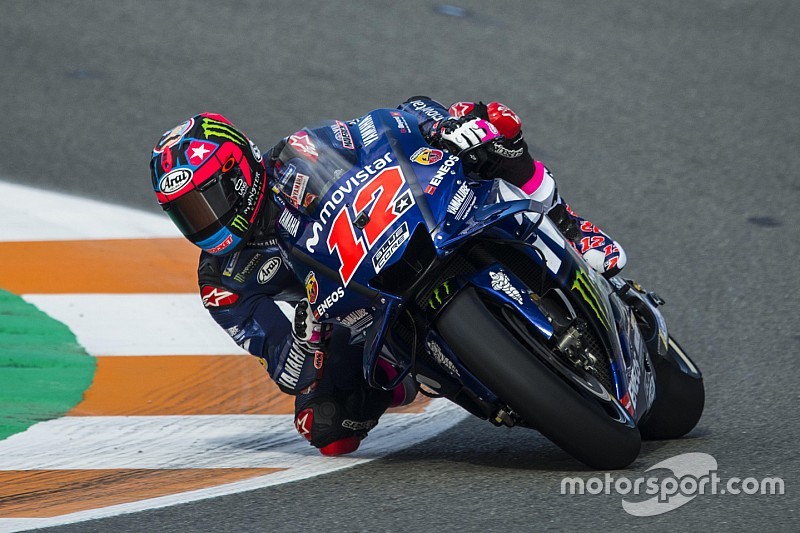 The track was wet when the session kicked off, and riders remained in the pits for the first hour and a half of the seven-hour session.

Johann Zarco was the first rider on track, his debut on a KTM lasting only one flying lap during which he nearly crashed as the Frenchman was on wet tyres on what was by then a nearly fully dry track.

Following another half hour of inactivity it was again Zarco on track but he was soon followed by the rest of the field, with Ducati riders topping the timesheets early on.

Test rider Michele Pirro, and new factory Ducati rider Danilo Petrucci both spent around 10 minutes on top before Andrea Dovizioso took over by four tenths with a 1m32.422s.

Marc Marquez snatched the lead soon after he made his first appearance halfway through the session on a 2018-spec Honda but Dovizioso was soon back ahead with a 1m31.854s.

Marquez then set two 1m31.7s during the fourth hour but he again couldn't hold on to first place for long with Vinales logging a 1m31.416s with two hours remaining.

Fifteen minutes later the rain flags were waved, which meant Vinales stayed on the top until the chequered flag, beating Marquez by 0.302s.

Marquez, who is not fully healthy after a couple of crashes during the Valencia season finale, had three bikes available, including a 2018 version, a brand new bike and a mix of the two.

The reigning champion's new teammate Lorenzo, who is also not fully fit, ended the day 18th, 1.2s slower than Marquez.

Valentino Rossi ended the day third for Yamaha, as the factory team spent the day comparing a new engine with the current specification.

Fourth-placed Dovizioso led the way for Ducati but the Italian didn't try the new-spec bike over the day.

Honda tester Stefan Bradl, riding for LCR in place of Cal Crutchlow, was fifth with Franco Morbidelli making an impressive debut with the Petronas Yamaha outfit in sixth.

Aleix Espargaro was the top Aprilia in seventh as the team's two new additions Andrea Iannone and tester Bradley Smith were 19th and 21st.

Petrucci settled for eighth place, ahead of Pol Espargaro, whose new KTM teammate Zarco was 17th.

Pirro completed the top 10, the Italian becoming the only rider to crash during the day at Turn 6.

Jack Miller's debut on a factory-spec Ducati ended prematurely due to mechanical issues, the Pramac rider ending up 14th.

He was followed by Suzuki rookie Joan Mir and Tito Rabat, who returned to track action for the first time since he broke his leg at Silverstone and was an impressive 16th.

Yamaha's new test rider Jonas Folger and rookie Fabio Quartararo were 22nd and 23rd respectively, as the order was rounded out by Tech 3 pairing Hafizh Syahrin and Miguel Oliveira on the French outift's new KTM bikes.