Work continued for the Ducati Team on the second of three days of testing planned for this week at Circuit de la Comunitat Valenciana, where Andrea Dovizioso and Cal Crutchlow turned 62 and 53 laps, respectively.

The Italian tried an updated chassis and put in more track time with a fairing that he had first tested briefly yesterday. He also worked with updated electronics settings to cope with the reduced fuel-capacity limit for 2014 (20 litres), and ended the day eighth-best.

Crutchlow, meanwhile, continued familiarizing himself with his new bike and experimenting with setup. The Briton suffered a crash at Turn 8 near the end of the day, at which point he occupied the eleventh spot on the timesheets. 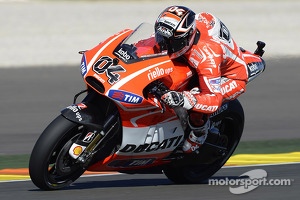 Andrea Dovizioso (Ducati Team) 8th, 1:31.661 (62 laps) “We tested a new frame today, but there isn’t really much difference so we didn’t improve a lot. We also tested a different fairing and some different settings, things we’ve already tested but this time to give feedback to Gigi [Dall’Igna]. The lap time is quite fast, but everyone was quite fast because the conditions were good. At the end it was difficult to make a lap time because the sun was very low. I’m happy about the lap time at the end but the bike is similar to during the weekend.”

Cal Crutchlow (Ducati Team) 11th, 1:32.114 (53 laps) “Obviously we’re just getting to grips with the Ducati, riding around doing as much as possible. We didn’t do a lot of laps, but made a lot of changes. The team’s working good, they’re listening to my comments a lot, and Gigi is here gathering information. It was a more challenging day for me today, but positive in the end. We didn’t go as fast as yesterday, but would’ve gone faster as we changed the bike really drastically at the end of the day and seemed to have found something, but it was a compromise, as I had rear grip but little front grip and crashed! I think we could’ve been in the mid-31s if we had pushed.”