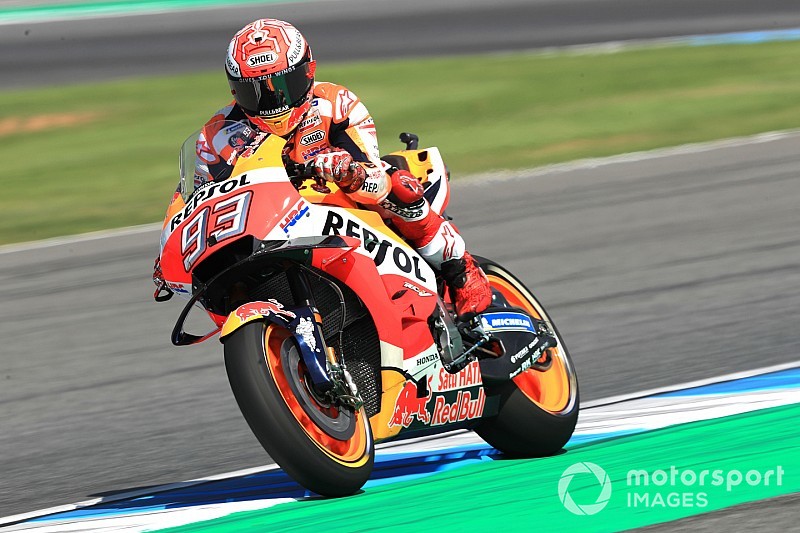 Honda rider Marquez was forced into the first part of qualifying after a crash during Saturday morning’s third practice session left him 11th in the combined classification.

But after making it through Q1 with ease, the Spaniard came out on top in the subsequent 15-minute pole position shootout at Buriram.

After leading the opening runs on a 1m30.356s, Yamaha’s Rossi briefly took over at the top of the timesheets with a 1m30.099s with two minutes left on the clock.

Marquez responded moments later with a 1m30.088s – good enough to take pole by 0.011s, but half a tenth slower than he had managed in Q1.

It marks the first time a rider has taken pole in MotoGP having come through Q1.

Teammate Dani Pedrosa’s 1m29.781s effort in February testing remains the fastest-ever lap on a MotoGP bike of the Buriram track, however.

Behind Rossi, Andrea Dovizioso was third on the sole works Ducati, following the withdrawal of Jorge Lorenzo after his huge crash on Friday.

Dovizioso had looked poised to usurp Marquez on his final lap, but dropped time in the final two sectors and ended up falling short by 0.139s.

Maverick Vinales made it two Yamahas in the top four, missing out on a front row spot by a tenth, followed by Cal Crutchlow (LCR Honda) and Andrea Iannone (Suzuki).

Pedrosa was seventh ahead of Johann Zarco (Tech 3) and the two Pramac Ducatis of Danilo Petrucci and Jack Miller.

After his FP3 crash, Marquez unsurprisingly dominated the opening segment of qualifying, as his time of 1m30.031s put him nine tenths clear of the pack.

The battle for the other top two place was between Rins and Marc VDS Honda man Franco Morbidelli, who was poised to go through until being beaten by just 0.002s after the chequered flag fell.

Aprilia’s challenge was led by Aleix Espargaro in 16th, while younger brother Pol qualified 19th on his return from injury aboard the second KTM.

British Superbike-bound Scott Redding struggled to 13th in Q1 and last place on the grid for Sunday with a time six tenths slower than Aprilia stablemate Espargaro.

Thailand MotoGP qualifying as it happened