© 2021 Motorsport Network. All rights reserved.
TV Buy tickets Store
Previous / Can Yamaha get its 'miracle' in Thailand? Next / Thailand MotoGP - the race as it happened
MotoGP / Thailand GP / Practice report 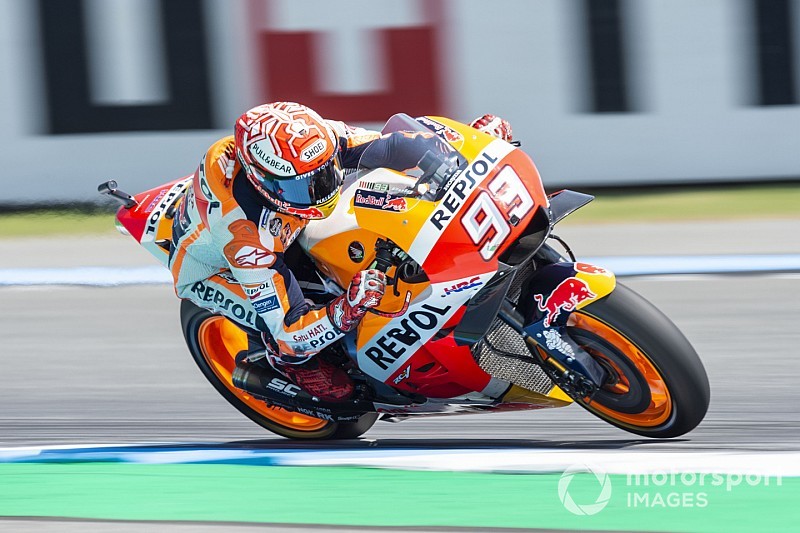 Marquez and Rossi spent much of the 20-minute session exchanging fastest times, with the Honda rider holding the advantage at the halfway mark with a best effort of 1m31.072s.

With four minutes left to run, Marquez managed to shave another fraction off that time as he posted a 1m31.059s, which was then beaten two minutes later by Rossi's 1m30.990s.

Rossi's time at the top of the times didn't last however, as Marquez - running just a couple of corners behind - immediately logged a 1m30.863s to retake the top spot by 0.127s.

Vinales was not far behind Yamaha teammate Rossi at the finish, ending up just 0.260s off the pace in third.

Andrea Dovizioso was fourth-fastest on the sole works Ducati, 0.299s off the pace, followed by top Suzuki rider Andrea Iannone and the satellite Ducatis of Jack Miller (Pramac) and Alvaro Bautista (Nieto).

Dani Pedrosa, whose best time in February testing remains the quickest set at the Thai venue on a MotoGP bike, was eighth fastest aboard the second works Honda, 0.754s down on Marquez.

The three leading independent riders all had low-key sessions, with LCR Honda's Cal Crutchlow ending up more than a second off the pace in 16th, ahead of Johann Zarco (Tech 3 Yamaha) in 19th and Danilo Petrucci (Pramac) in 21st.

Can Yamaha get its 'miracle' in Thailand?

Thailand MotoGP - the race as it happened