Filippo Preziosi has signified his intentions to step down from his role at Ducati Motor Holdings following 19 years at the iconic Italian brand based in Bologna. The engineer, who developed Ducati’s Desmosedici GP machine that ultimately led to the factory winning the MotoGP World Championship with Casey Stoner in 2007, has resigned due to health reasons.

The 45-year-old had just moved positions within the company from his role as head of Ducati Corse, the factory’s racing division, into the role of Director of Research and Development of Ducati Motor Holding. The change of positions coincided with the takeover of Ducati by the Audi Group with former BMW Superbike Director Bernhard Gobmeier taking over Preziosi’s role. 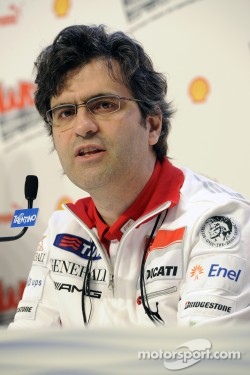 Ducati set the MotoGP world alight with its lightning-fast Desmosedici GP bike in 2003 with the machine achieving instant success in straight line speed and achieved its first win with Loris Capirossi on board. Capirossi went on to take 6 more wins while Troy Bayliss also notched up a first place on the machine but it was Stoner who took the machine to its pinnacle in 2007 and with the guidance of Preziosi, Stoner went on to win the World Championship and in total he recorded 23 wins.

While the success of 2007 will always be remembered as a very important moment in the history of MotoGP with the Italian manufacturer beating the might of Japanese manufacturers Yamaha and Honda, the failure to win even one race with seven times MotoGP World Champion Valentino Rossi on board in two years of trying will always be recalled. It was following these two dismal years in 2011 and 2012 that Preziosi made the move into the head of Research and Development role only to announce his retirement a short while after his appointment.

The full press release from Ducati Motor Holding is as follows, “For reasons of poor health, Filippo Preziosi has taken the decision to resign his position The company thanks him for 19 years of outstanding professional service. Declaring reasons of poor health related to his particular physical condition, Preziosi’s resignation was accepted by Ducati, saddened and disappointed to lose such an accomplished and strategic member of staff. The company respectfully acknowledges the 45-year-old Italian’s decision and thanks him for his significant contribution during his 19 years with Ducati, 12 of which were within Ducati Corse.

Previously occupying the role of General Manager of Ducati Corse, Preziosi, was appointed Director of Research and Development of Ducati Motor Holding at the end of 2012 and was to start his new role after a period of rest. An announcement of the successor to this strategic role, now left vacant by the resignation, will be communicated in due course,” the statement ends.

Yamaha get back to business Texas style