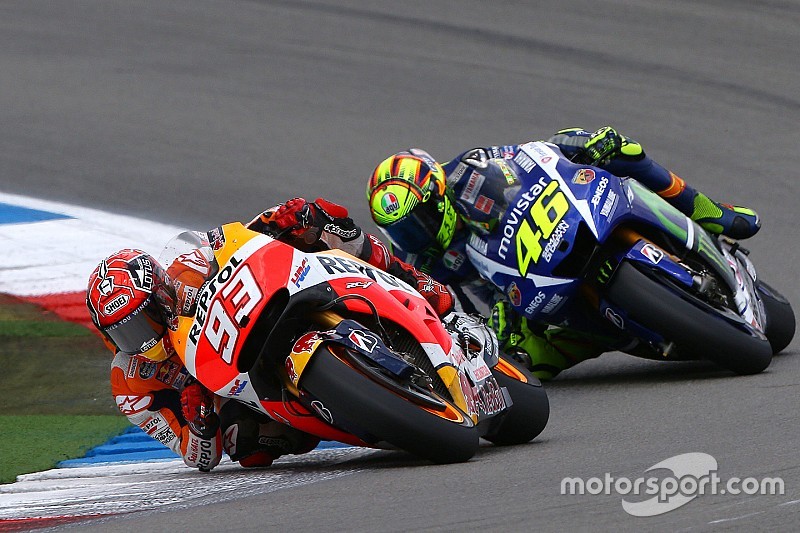 “Afterwards, I see very clearly that he played with us” – those were the words that triggered one of the biggest ever controversies not just in MotoGP, but in the entire world of motorsport.

A week earlier at Phillip Island, Valentino Rossi had finished off the podium for the first time all year in dry conditions, coming off worst in an epic four-way encounter with title rival Jorge Lorenzo, Marc Marquez and Andrea Iannone.

Nobody was accused of foul play, until Rossi revealed in the pre-event press conference at Sepang that he felt Marquez could have won easily – and instead hung back to allow Lorenzo to get away before pouncing on the final lap to take victory.

“I think his target is not just to win the race, but also help Lorenzo to go far and try to take more points from me,” said the Italian, who went on to twist the knife further speaking to media after the conference.

“He is angry at me for a personal matter,” elaborated the 36-year-old. “Although he never said it, he thinks that in Argentina I made him crash.

"And then at Assen he is still thinking about the last chicane, in his head he feels he should have won that race.

“Since then, he has been thinking like a child: the lesser evil is for Lorenzo to win.”

The stage was set for the Sepang race – and it quickly became clear it was personal between Rossi and Marquez, who became embroiled in a bitter scrap for third as Dani Pedrosa and Lorenzo rode into the distance ahead.

After several near-misses, matters finally came to a head at Turn 14 on the seventh lap, as Rossi – his patience exhausted – deliberately ran Marquez out to the edge of the track. What happened next is a point of contention, but all that really matters is that Marquez hit the deck as the duo touched, while Rossi continued to finish third.

The race stewards chose to delay reaching a verdict until after the race, before ultimately awarding Rossi three penalty points – effectively sentencing him to the rear of the grid for the Valencia finale, while allowing him to keep his points for third.

What followed left none of the sport’s protagonists with much in the way of integrity. Marquez accused Rossi of kicking him off his bike, something neither Honda nor race direction has been able to prove; Rossi, feeling wronged despite his move initiating the contact, notoriously took the matter to the Court for Arbitration for Sport (CAS); while Lorenzo argued Rossi got off too lightly, and with the championship very much on the line also tried to get himself involved in the CAS arbitration.

Race direction was also criticized for not reaching a judgement during the race itself, allowing the matter to fester for a full two weeks until the MotoGP circus arrived in Valencia – with Italian media peddling myths of a Marquez-Lorenzo alliance having been signed in September, and two Italian journalists even breaking into Marquez’s home and getting involved in a ‘brawl’.

In the end, CAS denied Rossi the stay of execution he needed to start from his qualifying position, forcing him to slice his way through the order from 24th on the grid. By the time he arrived in fourth, Lorenzo, Marquez and Pedrosa were too far ahead to catch, meaning he needed both Honda riders to pass Lorenzo to win the title.

Marquez was stuck to Lorenzo’s rear wheel for nearly the entire duration, but his failure to launch an attack around the twisty Valencia track, as well as his fierce rebuff of Pedrosa in the closing stages, was interpreted by some – Rossi included – that the outgoing champion was playing the role of ‘bodyguard’ for Lorenzo.

“Today everyone has seen their plan,” Rossi told media afterwards. “This makes me sad and it's a very bad thing for our sport.

“The situation was already bad, but today was embarrassing for everybody.”

Marquez meanwhile dismissed such claims as nonsense: “If I tried to be the bodyguard of Lorenzo, I wouldn't have taken the risk to follow him.

"I'd have stayed five or 10 seconds behind and it would have been easy. But my target was to give 100 percent and to fight for victory.”

With his seventh win of the year in the bag, Lorenzo was crowned MotoGP champion for the third time, but his success seemed to be a mere footnote compared to the recriminations of the final two races, as well as the unresolved CAS judgement.

The appeal was finally dropped by Rossi in early December, but the entire affair will still inevitably cast a long shadow on the 2016 season. The next time Rossi and Marquez are dicing for the same piece of tarmac, it’s sure to be explosive.

#7: Cars fly, Hinchcliffe cheats death in Month of May chaos

#10 No winners in Kenseth/Logano Chase war

Pedrosa “most talented of us all”, says Marquez

Stoner: I was quick enough to stand in for Pedrosa