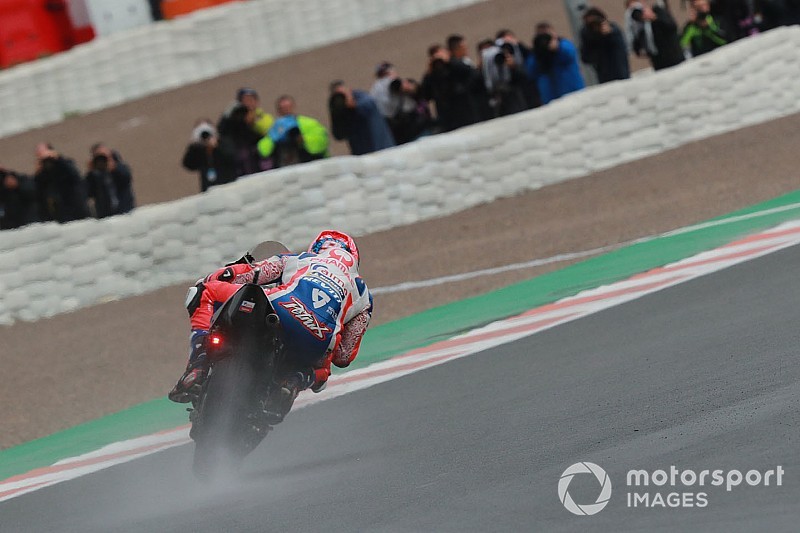 Petrucci led FP1 pace-setter Marc Marquez, with only the champion and third-placed Valentino Rossi fitting in within a second of the session leader.

Tech 3's Johann Zarco took the early lead – with a lap some eight seconds off FP1 pace – and was on course to lower the benchmark when he threw his satellite Yamaha into the gravel at the sharp Turn 12 right-hander.

The crash ripped the left winglet off his YZR-M1, leaving the appendage in pieces on the racing line, which coupled with worsening track conditions prompted a 10-minute red-flag stoppage.

Suzuki ace Alex Rins had taken the lead by then, but times began to drop rapidly once track action resumed, with Petrucci, Marquez and Rossi taking turns out front.

At the halfway mark, with the latter two already in the pits, Petrucci leapfrogged Marquez with the new benchmark of 1m41.318s.

And with track conditions having peaked, this was enough to keep Italian top at the chequered flag.

As laptimes in the afternoon fell well short of FP1, Rossi remains outside of the combined practice top 10 despite placing third in FP2 - meaning he will be forced to fight through Q1 if he can't improve in Saturday morning practice.

Andrea Iannone took fourth place in the session, followed by the Espargaro brothers, Aleix ahead of Pol.

Yamaha's Rossi's works teammate Maverick Vinales was seventh, ahead of Scott Redding and Bradley Smith – the pair making it two Aprilias and two KTMs in the top nine.

Rins ended up 10th, one place ahead of Avintia Ducati's Xavier Simeon, who had been to hospital after suffering a suspected concussion in FP1 but was back on the bike in the afternoon.

The Belgian had crashed again here, sliding off at Turn 12, while Cal Crutchlow's LCR Honda stand-in Stefan Bradl went off at the same corner a couple of minutes later.

Ducati's Andrea Dovizioso had a quiet session in 12th but remains on course to make Q2, whereas teammate Jorge Lorenzo, recovering from injury, was 15th and is facing Q1.