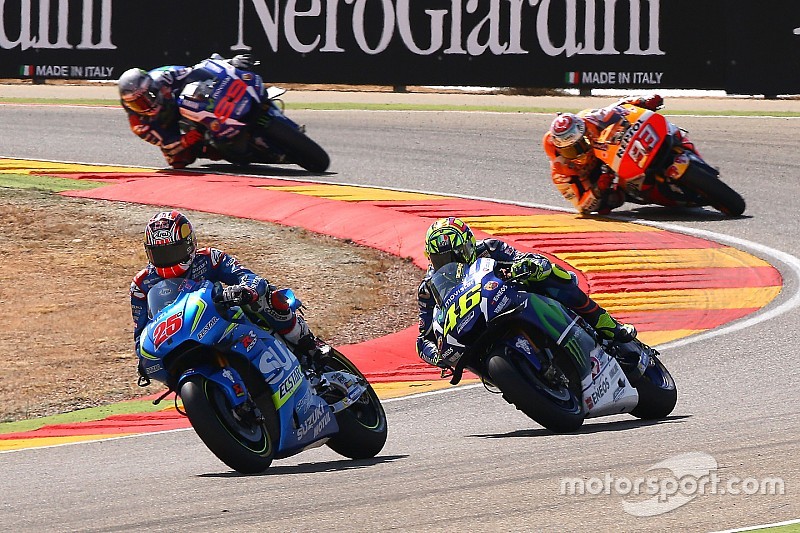 Starting from second on the grid, Vinales spent much of the opening part of the Motorland race in the lead, taking advantage of an early mistake by eventual winner Marc Marquez.

However, the Spaniard was unable to pull away by more than six tenths, and was soon reeled in by future Yamaha teammate Valentino Rossi, with Vinales running wide and dropping to third during their battle.

He was then demoted to fourth place by Jorge Lorenzo’s Yamaha, Vinales going on to finish eight seconds down on a dominant Marquez.

Having taken Suzuki’s first victory since 2007 two races prior at Silverstone, the 21-year-old says the Japanese manufacturer needs to make further progress to truly be on the same level as Honda and Yamaha.

“It was a good ride,” said Vinales of his performance. “I tried to make the same strategy as Silverstone – when I saw myself in first, I just tried to push, push, push.

“When I still conserved the grip, the bike was really good, I was riding quite consistent in [1m] 59s low, even 59.0, 58.9. I was really happy and quite surprised I could keep this pace.

“Then when the grip went down, I make many mistakes, I was locking a lot the rear tyre on the brakes, so it was difficult to stop.

“It was nice to battle there in the front. I feel my riding style was on the level, so we can do more races [like this].

Asked if he now feels he belongs with the leading group of riders, Vinales replied: “Yeah, we battled quite good, I defended my position all the time I could defend.

“If we want to stay there, stay really in the front, we need to make another step - and I think we can.”