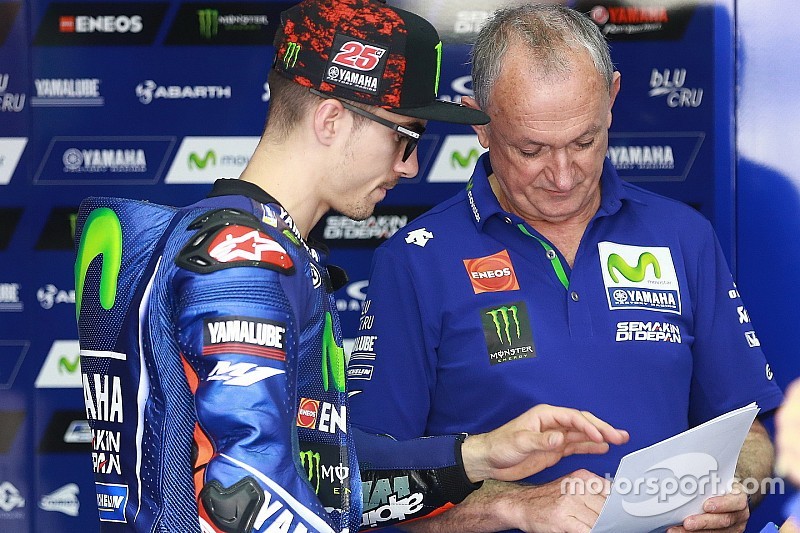 Maverick Vinales’ MotoGP crew chief Ramon Forcada has revealed the Yamaha rider did not tell him “a single word” about their impending split.

Vinales confirmed to the media on Friday that he and Forcada will go their separate ways after the end of the 2018 season, with Esteban Garcia moving across from KTM to take his place.

Forcada, who was Jorge Lorenzo’s crew chief during his Yamaha years, has been tipped to remain in the Yamaha fold and work alongside Franco Morbidelli at the new satellite SIC squad in 2019.

The split comes after months of tension between Vinales and Forcada, with the Spanish rider growing frustrated at a winless streak that stretches back to last year’s French Grand Prix.

“Yamaha communicated it to me a few days ago, but from the rider there has not been a single word,” Forcada said in an interview with Spanish TV channel Movistar.

“They told me there is an alternative, and we are looking to find a solution with Yamaha. Nothing is decided, but I will continue with Yamaha, maybe with the satellite team.

“I do not know what happened, you have to ask the rider. No complaints, no bad gestures, absolutely nothing. I can’t tell you anything.

“Every rider has his need and wishes, but as the rider has never said anything to anyone, we don’t know. You have to talk to the rider.”

Forcada said he would continue his work as normal until the end of the year despite the news, while hinting at a potential split even before the end of the season.

“In the end, everyone here is, or tries to be, professional,” he said. “We do the job as before, the relationship is the same as before, for me there is no difference.

“I will try to make a bike to win until my last race with him [Vinales]. I’m not sure when this will be, because as things stand I do not know.

“For my part I will continue to do my normal work, as I have done all my life.”

As well as Forcada, it has emerged that another of Lorenzo’s former Yamaha crew members, Javier Ullate, will not continue to work with Vinales in 2019.

Wilco Zeelenberg is also set to be replaced in his role as rider coach for Vinales, who said on Friday he would like former 125cc champion Julian Simon to take on the role.

Brno MotoGP qualifying – as it happened