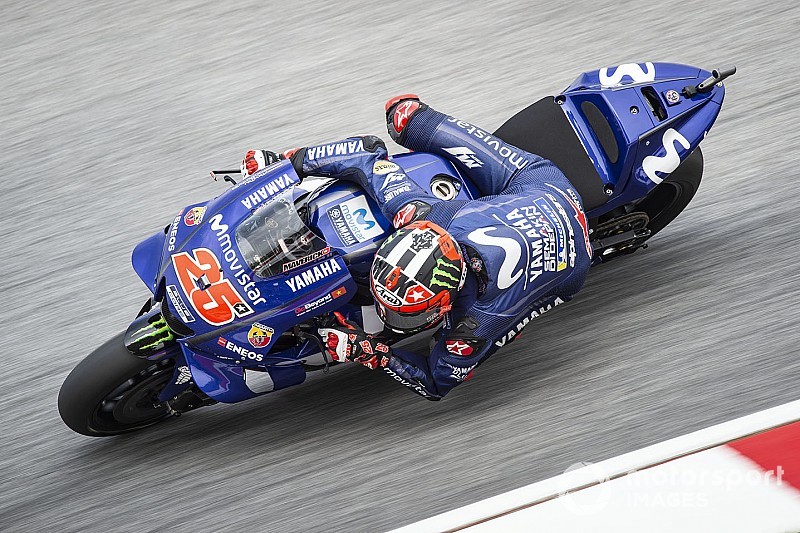 Maverick Vinales will ditch his traditional number 25 in favour of the number 12 for the 2019 MotoGP season, the official entry list has revealed.

Vinales has used the 25 since racing in the Spanish-based CEV series, except during his one and only season in Moto2 when sponsor demands prompted him to wear the number 40.

However, the Yamaha rider has opted to use the number 12 for the 2019 campaign, because his birthday is January 12.

Thomas Luthi had been using the number this season, but the Swiss rider is dropping back down to Moto2 next year after a single troubled season in the premier class with the Marc VDS team.

The 2019 entry list also confirms the race numbers that next year's rookie class will use.

Fabio Quartararo (20) and Joan Mir (36) will both use the numbers they have used in Moto2 this season.

Francesco Bagnaia's 42 is already in use by Suzuki rider Alex Rins, and the 21 he used in Moto3 is taken by Franco Morbidelli. Bagnaia will therefore use number 63 when he joins the Pramac Ducati squad.

Miguel Oliveira, meanwhile, has raced the 44 up to now, but with KTM stablemate Pol Espargaro already using that, the Portuguese rider will instead race the 88 for the Tech 3 team.

Besides Vinales, the existing riders will all continue to use the numbers they have used this year.

Also on the entry list are the official team names for the 2019 campaign, some of which have changed.

After splitting with title sponsor Movistar, and acquiring Monster backing for next season, the factory Yamaha team is now listed simply as 'Yamaha Factory Racing'.

Tech 3 is now listed as 'Red Bull KTM Tech 3' in accordance with its new sponsor deal with the Austrian drinks firm, while the SIC squad that replaces the Angel Nieto team on the 2019 grid is listed as 'Petronas Yamaha SRT'.

Finally, the entry list provides official confirmation that Tito Rabat will remain with the Avintia Ducati squad next year.