Yamaha MotoGP riders Valentino Rossi and Maverick Vinales believe they were on course for a 1-2 finish in the heavy rain in Valencia, before Vinales crashed and the race was stopped.

Pace in the wet was an obvious weakness of the 2017 specification of the YZR-M1, but the Iwata firm has made strides in that aspect this year, which enabled Valentino Rossi to fight for victory in Valencia.

Vinales had slipped back after starting the season finale from pole, but as rain intensified his pace stabilised and he looked to be getting himself back into contention when he crashed out of fourth behind Rossi.

The race was red-flagged due to conditions shortly after, just as Rossi caught up with race leaders Alex Rins and Andrea Dovizioso.

“If I don't fall and the race isn't stopped, Rossi and I would've secured a double,” Vinales suggested afterwards.

Both Rossi and Vinales were running the soft front tyre, as opposed to the medium for Rins and Dovizioso, but the race stoppage gave eventual winner Dovizioso opportunity to switch to the other compound.

Rossi, who crashed out of second place after the restart, concurred with his teammate's assessment that the red flag wasn't beneficial to him.

“For me was a great shame, the red flag,” he said. “At that moment we [the Yamahas] were faster on the track and especially we have the right tyres, Rins and Dovi are more in trouble.

“This is negative for us to stop because at the end we can arrive first and second.”

The Italian made it clear, however, that he had no issue with the decision to red-flag the event.

“About safety, [it] was dangerous, was a bit too much water,” he conceded. “For me, is okay, the choice.”

Vinales, who was thrown off his Yamaha at speed going through the sweeping Turn 13 left-hander, said he had been suffering with a bike issue from the start.

“The fall was the result of an electrical problem we had,” he said. “I don't know if a sensor failed, but the bike was delivering power in a very rare way.

“The problem was reflected in the anti-wheelie and traction control. I needed five or six laps to understand how I had to ride – once I understood it, I was much better.

“Everyone was passing me on the straights because the bike did not give me power. I pushed hard to recover and I ended up flying.” 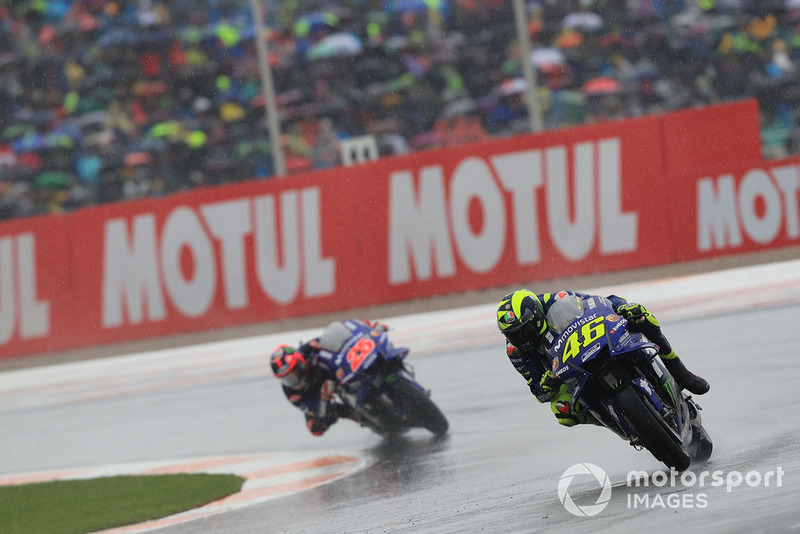