Vinales would "rather end up on the ground than second"

Maverick Vinales said that he was not going to settle for second place in MotoGP's Australian Grand Prix and that he would have rather crashed - which he ended up doing. 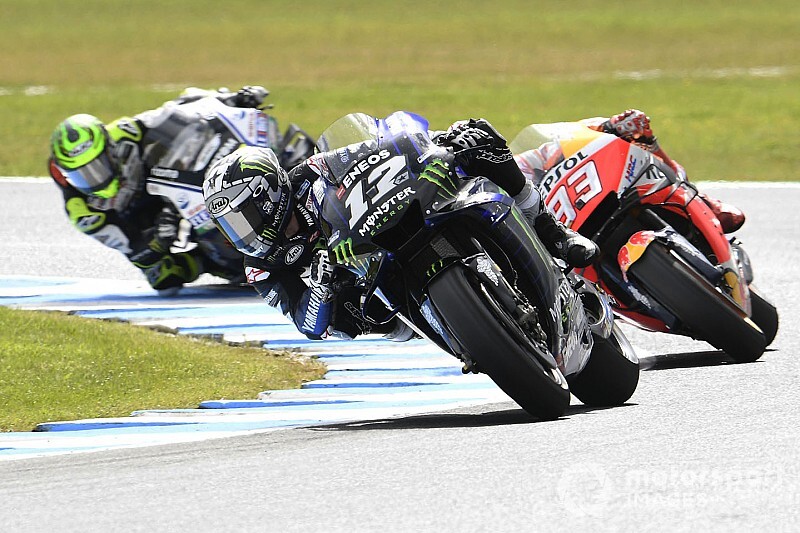 Yamaha rider Vinales led the majority of the race but Marc Marquez was right behind him all along and the Honda man passed him on the main straight as the final lap began.

Vinales knew that Marquez is waiting for the last lap to make his move, and said that his strategy was to retake the lead at Turn 10 ahead of Lukey Heights, where he had a clear advantage thanks to Yamaha's cornering speed.

He ended up crashing at the turn - but says he doesn't regret trying as his aim was the victory.

"I was going for the victory and I wasn't getting second place. I tried to overtake him and when I pulled the angle and slowed down, I locked the rear," he explained.

"It was my fault, there's no doubt about that. I knew Marc was waiting for the last lap to pass me.

"I start the last lap much more tight to the kerb, to say 'okay, maybe I have the chance that [if] he overtake at the last moment I can brake later'. [But] he overtook me before the finish line.

"I had another plan, I was planning sector three to push at the maximum and to overtake in corner 10, it's what I did.

"Already before the crash I planned to go in without brakes, and see what happens, but I locked the rear.

"I knew he was going to overtake me there [on the straight] but I had prepared the third sector very well to come back. I'd rather end up on the ground than second."

Despite crashing, Vinales called it a "very positive" race, having been set to beat the rest of the field by over 10 seconds.

"For me was a very positive race, I crash but I was satisfied, I give my best every lap. What can I say, the bike has to improve for sure but today the bike was working on a really good way.

"But I keep working, I need to understand the way to fight with Yamaha, so if this time was fall down, maybe next time I can do the attack. We'll see. Today was important.

"I am quite happy because I keep a good rhythm, maybe only Marc was better than us, but the rest were 11-12 seconds on the back."

Crutchlow: 2018 Phillip Island crash "haunted me for a year"