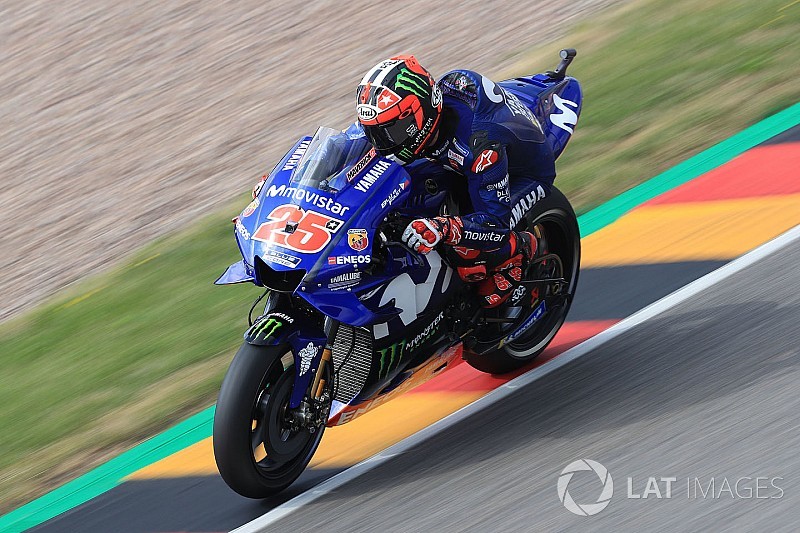 Taming the Yamaha MotoGP bike’s “brutal” power delivery will be key to returning the manufacturer to winning ways, according to Maverick Vinales.

Yamaha’s works riders Valentino Rossi and Vinales finished second and third behind a dominant Marc Marquez in Sunday’s German Grand Prix but neither were able to threaten their Honda rival for victory.

It came as Vinales once again struggled for pace in the early stages of the Sachsenring race before making a late charge, finally beating the Pramac Ducati of Danilo Petrucci to the final step of the podium.

The Spaniard felt he had more grip at the midpoint of the 30-lap encounter than he did at the start on fresh tyres, and that the rear of the M1 still tends to slide with its current electronics package – an area in which Rossi has repeatedly called for improvements.

“The real problem is that in the first laps we have a major lack of grip,” said Vinales. “At the start of the race it was like using use tyres, the bike slid a lot.

“It seems I had more grip on the 16th lap than on the first lap with the new tyre. It’s always been like this, except for the races I won last year. Maybe I need to weigh a few kilos more!

“In the end, we have nothing that could make the bike sweeter. We have so much power but it’s delivered in a brutal way. The rear tyre slides a lot.

"I'm trying to improve my riding style because if the improvements in electronics do not come, I'll have to make the difference [myself], so I'm very focused on that."

Vinales added that he feels Yamaha is still lagging behind Ducati, but was able to benefit from the Italian manufacturer’s woes at a track that has traditionally been among its worst.

Jorge Lorenzo led the early stages at the Sachsenring but slipped to sixth in the end as he struggled with rear tyre life, one place ahead of factory teammate Andrea Dovizioso.

“We’re still far from Ducati, so I think it’s a question of the track [that we were ahead],” Vinales said. “Exiting the last corner, we lost so much compared to the Ducatis.

“But we did a great job in the box all weekend to improve, even if we are still missing something. If we can improve the first 10 laps, we’ll be ready to fight with Marc.”