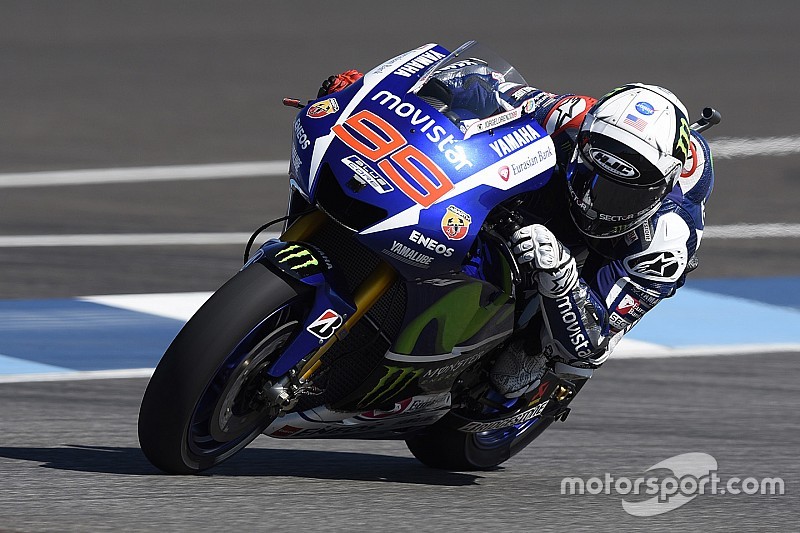 Lorenzo started from third on the grid and took the holeshot as the field bunched up in the first corner. He put his head down to clear off at the front closely followed by rival Marc Marquez behind, the two racing with less than 0,3s between them.

The Yamaha rider kept the pace up lap after lap with an inch perfect performance and led until three laps remained, Marquez making his move going into turn one to take the lead. Lorenzo tried to pass back, but was unable to make it stick and had to settle for second place, 0,688s from the front.

I pushed a lot from the start in every corner and I probably lost more energy than Marc, who was following me.

Teammate Rossi had a great start from eighth on the grid, climbing up two places going into the first twisty section, and crossed the line for the first time in fifth. He soon passed Andrea Iannone and put the hammer down in order to close a 0,4s gap to Dani Pedrosa in third. With 20 laps to go he was the only rider lapping in the 1‘32s and he reached the back of his rival‘s bike seven laps later. The tense battle that followed ended with the Italian passing the Spaniard going into turn two, but the race was far from decided.

The Doctor then continued his charge towards the front pack before again getting involved in a scrap with the chasing Pedrosa. Despite the Spaniard‘s best efforts Rossi was determined to claim the final spot on the podium, exiting the fight in front to finish in third +5.966s behind the race winner.

Lorenzo‘s well-deserved second place puts him on 186 points, 9 points behind championship leader Rossi, who holds a total of 195 points.

Jorge Lorenzo: "It could have been worse and it could have been better. Second place in MotoGP is always a very good result because these are the best riders in the world, so to fight for the win and lead for so many laps during the race is difficult. I pushed a lot from the start in every corner and I probably lost more energy than Marc, who was following me.

When he attacked I really didn‘t have enough energy and I wasn‘t fresh enough to make an attack on him, so I recovered four points on Vale and lost five points to Marc, but he‘s still quite far behind in the championship. I think we should celebrate this result after a difficult weekend and my crash from this morning. I am satisfied, let‘s see what happens in the next race."

Valentino Rossi: "At one moment Jorge was in front and I was fourth so I would have lost twelve points. I had to try at the maximum because these points for third are more important for me than for Dani. I gave my all and it was very difficult because this track, with this temperature and humidity is very demanding, but I‘m happy at the end because it was a good race and I had a good pace.

The problem is the qualifying, we struggle too much in the practice and we arrive with a little bit too much of a delay before finding a good setting. Starting from the third row is always difficult. I started well and I was fast on the first laps so, if I would have been able to start from the second row, I would have been able to stay with Marc and Jorge until the end of the race. We have to work hard on this, starting from Brno."

Massimo Meregalli: "This is a really important double podium at a difficult track for us and we led 90% of the race. Jorge was very close to the win today and we couldn‘t ask anything more from him, he gave his all. He started this Grand Prix strongly and the bike was working quite well the entire weekend. Valentino was able to make a step this morning and it‘s a pity that he started from the third row. Had he started closed to the front he would have been able to stay closer to the leaders, but we still lead the championship. A big thank you to the team, they have done a great job. Next we are going to Brno with high motivation where we will aim to progress even further and try to build on this momentum."