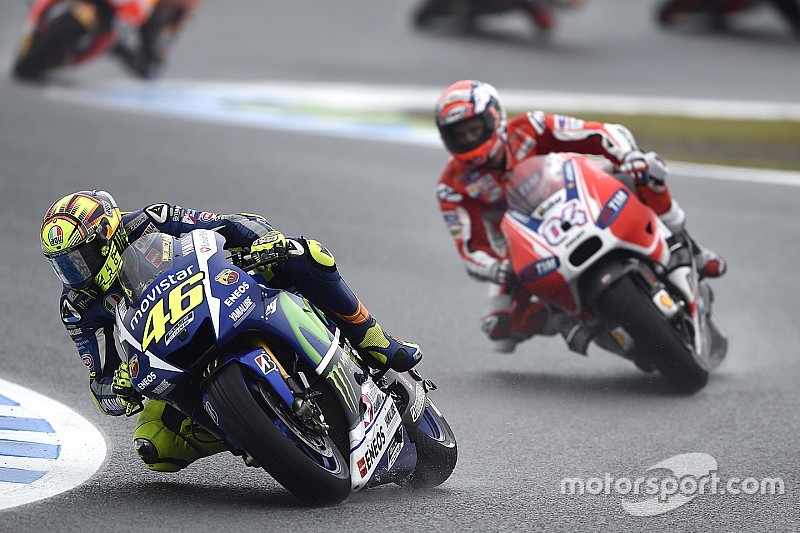 Movistar Yamaha MotoGP rider Valentino Rossi remained calm and collected in a tense and difficult race, to secure second place. Teammate Jorge Lorenzo had a strong start to the race at Twin Ring Motegi, but suffered tyre problems mid-way through the race and took a strong third, making it a ninth double podium for Yamaha.

Rossi had one goal for today‘s 24-lap race: to extend his lead in the championship. You could cut the tension with a knife as the lights went out signaling the start, but he didn‘t let it get to him and had a dream launch from second place on the grid to take the holeshot in front of Lorenzo. As the Spaniard fought back, the teammates got involved in a shot duel in the first corners, but due to cold tyres and the treacherous conditions, the Doctor was unable to stay with Lorenzo. So began a lonely ride until Dani Pedrosa closed down the margin with nine laps to go and piled on the pressure.

... it's our ninth double podium of the season and it‘s certain one of our riders will win the championship.

Rossi, unwilling to give up second place and the additional four vital points difference for the championship, defended his position with all he had. He was unable to hold the Spaniard off for long, but was determined not to let him escape. He followed Pedrosa and together they reeled in Lorenzo, reducing the gap to less than 0,4s with five laps to go. Pedrosa quickly took over the lead and Rossi soon followed passed Lorenzo as the Spaniard went wide. The Doctor kept his head down and squeezed out the maximum to create an over three second gap to Lorenzo, but he was unable to stay with Pedrosa and took second over the line, 8.573s from the front.

Lorenzo had a good start to the wet race from pole. He entered the first corner in second place behind his teammate, but needed little time to take over at the front and made clear he meant business. With a clear track in front of him he was in his element and consistently increased the pace, creating a gap of over three seconds, but it wasn‘t to last. As the track dried up, his front tyre started to deteriorate, forcing him to lower his pace and allowing his rivals to come closer.

With seven laps remaining Pedrosa was within 0.5s and he brought Rossi with him. Lorenzo gave everything to keep his chasers at bay, but the front tyre was too degraded for him to give his all and he fell back to third with five laps to go. The Spaniard did well to bring his Yamaha home in third place, securing another 16 points, together with a second consecutive double podium for Yamaha at Motegi.

Today‘s 20-point gain sees Rossi increase his lead in the championship standings to 18 points, with a point total of 283. Lorenzo stays in second place with 265 championship points. Additionally, these scores mean that Yamaha, besides securing the 2015 Team Title at the previous round, is certain that one of Movistar Yamaha MotoGP riders will be crowned MotoGP World Champion.

"Physically it wasn‘t so bad, but mentally it was very hard to always keep the concentration, because it‘s very easy to make a mistake. At the beginning we had a good pace, but Jorge was stronger than me and was able to create a small advantage. After that my pace was good, I stayed with him and tried not to lose more time and used it as a motivation to keep my concentration, but when the track started to dry everything became more difficult. The tyre gave up and started spinning a lot on the straight and Dani arrived. It was a difficult situation, because if Dani beat me and not Jorge I would have lost another nine points after Aragón.

I was able to do three or four very strong laps behind Dani and catch Jorge, who then made a mistake. I took an additional four-point advantage, which was our target, so we are very happy. The track was a lot better when it was fully wet, because the tyres worked well. When it starts to dry up it feels like you are in a boat at sea, the bike moves everywhere. Three or four times when I touched the throttle I felt the front go and said “no, no, no!”, so it was difficult, lots of stress."

It was a pity because I think that on the dry I was the fastest and the more consistent rider. Also in the rain I was very fast, but unfortunately the track dried up and my push at the beginning of the race probably made my tyre a bit worse than Valentino‘s and Dani‘s. When the track was almost dry, my front tyre was destroyed and I couldn't ride like before. For this race it was important to finish in front of Valentino, but the championship is not over, because I remember in 2013 I was even further from Marquez in the standings and I lost the championship by just four points. Eighteen points is a lot, but if I win all races and another rider finishes between me and Valentino, I can still win the championship.

"It‘s been a tricky race but despite that, we still had a strong start to the race. Both Vale and Jorge struggled with tyre degradation and did well not to get caught out by the difficult situation, because making a small mistake is easily done in races with varying track conditions like today. Still, we can be very satisfied with the results and the work we have done this weekend, it's our ninth double podium of the season and it‘s certain one of our riders will win the championship. A big thank you to the Team, they have worked very hard, but we don‘t have time to relax just yet. We are now immediately heading to the next race at Phillip Island where we aim to be the key protagonist again."