Johann Zarco admitted his horror crash with Marc Marquez at Phillip Island crossed his mind when the Spaniard passed him in the Malaysian Grand Prix. 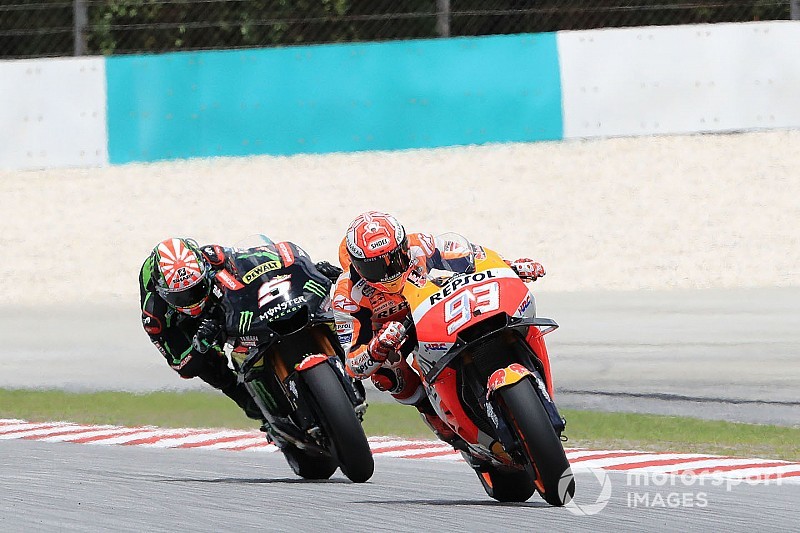 Zarco took his first podium finish since the fourth round of the season at Jerez and his sixth in MotoGP at Sepang.

The KTM-bound Frenchman lost out to Valentino Rossi to run second after the start and then gave up another position to the charging Marquez when he ran wide at Turn 14 a few laps later.

Zarco then kept up with the leading duo for the majority of the race but was never able to overtake, even admitting that his crash with Marquez at Phillip Island crossed his mind.

On that occasion, the Tech 3 rider hit the back of Marquez's Honda at the end of the main straight, making his bike go airborne at high speed - although he escape uninjured.

"When I went a little bit wide in Turn 14 he overtook me and then I got a good acceleration behind him, I had a little thought quickly," recalled Zarco.

"You are so focused but I saw the wheel and it looks the wheel came closer to my eyes and I say no, I will keep it away this time. Was just a very quick instant, after, I was focussed."

Despite Rossi's late crash, Zarco still only finished third as he fell behind the Suzuki of Alex Rins on the last lap as he was losing pace during the final laps.

Consequently, Zarco said that staying with Rossi and Marquez for so long was key to his podium finish.

"The strong beginning of the race was the key for the podium," he said. "I had great start from pole and it helped me to go away in the first two corners, Valentino then was pushing a lot and was going so fast.

"I wanted to overtake him but I was not able and finally following him was good enough to go away and save that podium.

"I did this mistake in corner 14, Marc overtook me very clean and then I tried to stay behind him, I expect he can catch Vale quickly.

"After Valentino crashed, I was second again with good gap to third, I thought I can control but five laps to the end I saw on the back that Alex was coming maybe five tenths faster than me lap by lap.

"I tried to push but I was not fast enough and in the last lap when he overtook me in turn 4.

"I want to overtake him again and fight a little bit but not the possibility, and I almost crash in Turn 11 so finish third, is just a fantastic present."

With Cal Crutchlow ruled out of action and Danilo Petrucci only finishing ninth, Zarco now leads the independent riders' standings by one point over the Briton, and is also tied with Alex Rins for fifth overall.

Zarco said: "Try to keep it [lead] in Valencia, and it is true that [I have the] same points than Rins, it means the one that finishes in front can be in the top five of the final championship, so this would be nice.

"Main target I think must be the first independent rider but if I have two things in one, why not."