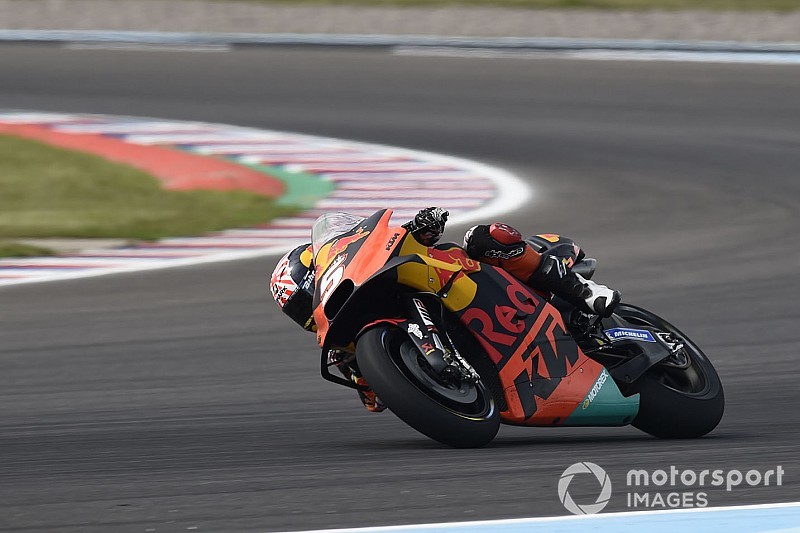 Zarco repeated his Qatar result in Argentina by finishing 15th, but he could only salvage the final points-scoring position after the last-lap crash involving Maverick Vinales and Franco Morbidelli.

Moreover, he was 7.7s behind teammate Pol Espargaro, who finished 10th, and was also beaten by Tech 3 KTM rookie Miguel Oliveira, who was 11th.

While Zarco dropped to the back of the field after getting stuck behind Jorge Lorenzo, who hit the pit limiter at the start, the Frenchman explained that he was also "fighting with the bike" the whole race.

"I almost struggle all the way, from the start. With Lorenzo I don't know what happened and I had to brake a lot behind him, I was second to last," he recalled.

"Beginning of the race, the first eight laps I was feeling quite good but not able to overtake my opponents because I cannot control well the bike at the moment.

"Then more and more I was going in the race it was coming harder and harder to ride the bike. I spent a lot of energy.

"Difficult to leave this kind of races when everything I would like to do, I can't. This makes me fighting with the bike, and then I am exhausted."

Zarco elaborated on his issues by saying that he can't ride the bike the way he wants, and his issues include sliding, turning and braking.

"It is all the movement I want to do on the bike that I learn to do in the past, everything I do is not working," he explained.

"Then the bike slides, not turning or difficult to stop, then it is everything becoming pretty complicated.

"That is why it is not only one thing to work on, but a global feeling to catch that I cannot catch it at the moment.

"I have to accept it, it is pretty difficult because I finish the race exhausted but I have to learn from that."

Zarco added that he doesn't want to give up the smooth riding style that made him so successful at Yamaha because he thinks that keeping that style will be crucial when KTM becomes a top team.

When asked if he tries to learn from Espargaro's data, he said: "I can study and analyse his data, for sure it is pretty different.

"I am quite methodical now to understand what he is doing on the bike, but I don't want to copy that.

"For me, it won't be the key to then make the big step that will be necessary for the future. I want to keep also my smooth and clean style and from that see where we improve."

How Honda exposed the inadequacy of MotoGP's rules