KTM rider Johann Zarco says an in-season test at Le Mans was a boost to his confidence because it allowed him to work away from the “stress” of a MotoGP race weekend.

The Frenchman has had a challenging start to life as a KTM works rider, scoring just five points in his first three races with the RC16 - 13 fewer than factory teammate Pol Espargaro and two fewer than Tech 3 KTM rookie Miguel Oliveira.

Zarco and Espargaro joined tester Mika Kallio in a private two-day test at Le Mans just over a week ago, and the Frenchman said this provided him a significant mental benefit.

“[It] was great to be back on the bike but without the stress of the FP1, FP2, it helped me to make a good work,” Zarco said.

“Even if we started far, we finished in the correct base, and that give me a good motivation and a better confidence. [I'm] happy for that, because I understood that that stress that we put on ourselves, that it's the situation of just two session during Friday, when we are not ready, it's difficult to be ready, and [when] we don't start on a high level, it's so complicated to reach this level.

“In Le Mans I've been able to see that what we do is going in the right way anyway.”

“We had the first day in dry and then it was fully wet in the second one, but yeah, it was nice – to set up the bike after all the changes we've done in the pre-season,” Espargaro said of the test.

“Le Mans is an important track for Johann, for him was so important to ride there before the [French] GP, and also he did pole last year so he's fast there. Also for me was good to see what Johann was doing and what Johann thinks about the bike around Le Mans.”

Zarco said he tried a different chassis that “helped me to feel better and helped me to go faster”, and that he was now looking to carry that progress through the first race weekend of the European leg at Jerez.

“The main difference I think was my cornering was getting better. I was not pushing more on track and I was getting faster,” Zarco explained.

“[We] still need some confirmation here because with the experience we know that something is working on some track, maybe is not working on other tracks.

“I think what we got in Le Mans should work here, then we will get a good confirmation to keep working.”

The Frenchman stressed that there was no “magic” solution that will instantly turn him into a frontrunner on the RC16.

“We are going up, slowly. When it's coming slowly, I get a little bit nervous and sometimes disappointed. But no, I need to really stay positive because I feel the team behind me a lot.” 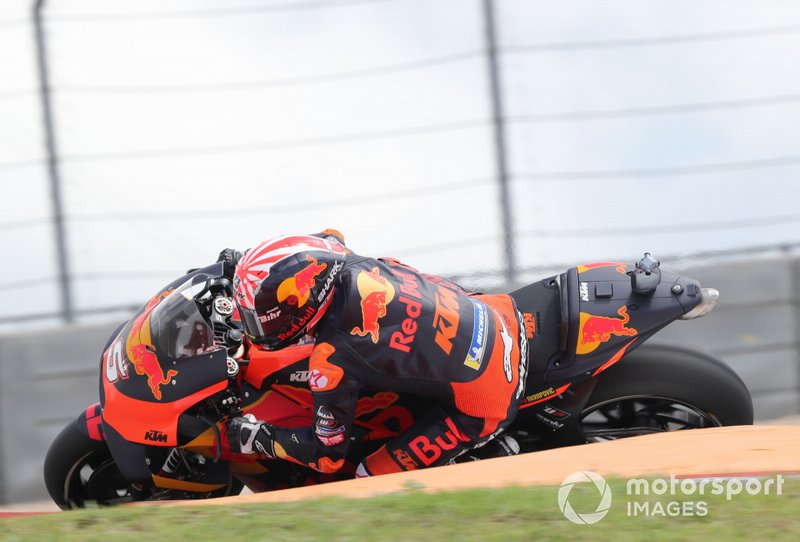 Mir feels he is already "really close" to Rins