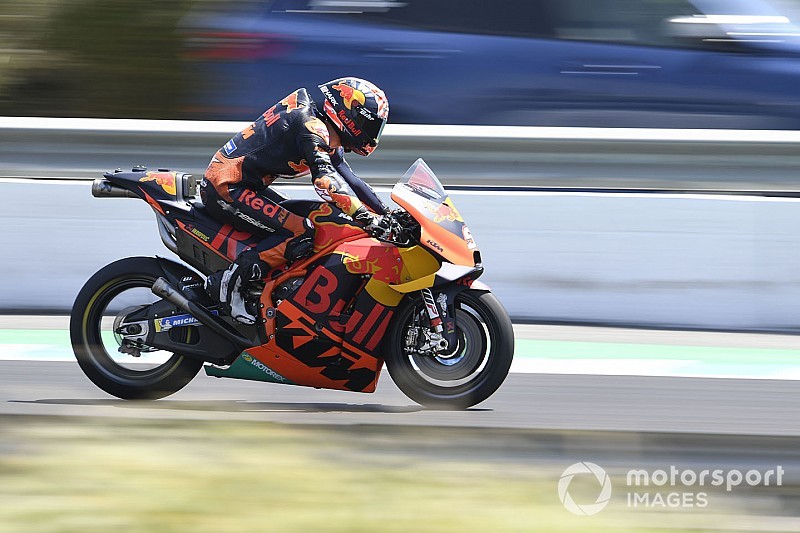 KTM MotoGP rider Johann Zarco says it was a “pity” to be focused on just finishing the Spanish Grand Prix at Jerez because he was “fighting more with the bike” than his rivals.

Zarco, contesting his first season with the Austrian manufacturer, ended the Jerez race in 14th to bring his 2019 points tally to just seven points – despite having scored in all four races.

The Frenchman was in a more positive mindset arriving to Spain after making progress in a private test at Le Mans, but was seen furious in an FP1 debrief with his KTM crew on Friday.

He went on to finish the race a place behind teammate Pol Espargaro, admitting his grand prix was “tough as usual”.

“I wanted to overtake more riders but was not possible for me,” said Zarco, who had equalled his best KTM qualifying so far with 18th on the grid.

“Really I have been too much limit on the race, losing a lot on acceleration - and then when you lose too much on acceleration, then it's complicated to overtake the riders under braking, because I'm always a bit too far to try something.

“I could keep some pace and I have some overtaking with Pol, but then he took kind of good pace and I could follow him more than half race, and then I lost a little bit the gap.

“I was staying focused to finish the race because at the moment it's the only thing I can go for the target. It's really a pity to have a target to just finish the race but I'm still fighting more with the bike than with the others.

“It's for me a general feeling that we have to bring everything more on the top. We got improvement during the weekend, but still the weak points were the same, so just at a different level.”

Zarco's improved showing compared to Espargaro, who has been managing to extract more from the RC16 so far, allowed him to observe the Spaniard's riding in the race.

But while Espargaro went on to challenge Honda's Jorge Lorenzo in the closing stages of the grand prix, Zarco could not follow his squadmate and wound up six seconds down at the chequered flag.

“What I saw from Pol is that he's also struggling to stop the bike, he went many times wide, but then when he opened the throttle he has more confidence and he has better control than me, with the traction,” Zarco explained.

“He does a lot of things with his hand, his right foot controlling the rear brake, and also maybe his strategy of electronic [set-up]. All this package that he knows well, he was controlling better than me and that gave him the potential to catch Lorenzo.

“Me, I didn't have this potential. I still believed that they will use [up] the tyre, I can catch it back - but no, the tyre is going down same for them and for me. And I had just to finish the race.”