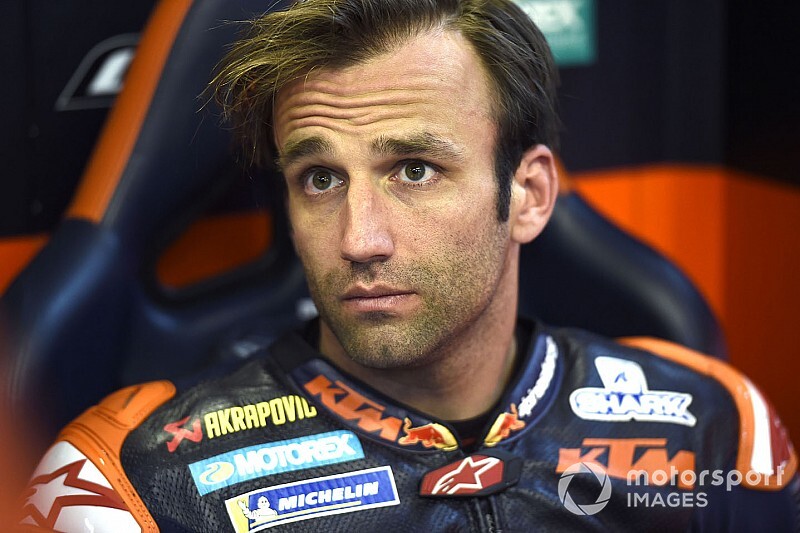 KTM MotoGP rider Johann Zarco claimed that he could have been in the mix for pole position in the qualifying session at Le Mans if not for a mistake in strategy in Q1.

In mixed conditions, Zarco started the first part of qualifying on wet tyres but, like many of his rivals, he pitted for slicks when he saw Valentino Rossi's tyre gamble had begun to pay off.

But then track conditions worsened after that, and Zarco rushed into the pits to go back out on wets, yet had no time left in the session to challenge for a Q2 berth, settling for fourth.

Zarco, who was a promising fifth in the wet FP3 session, will still have his best starting position since joining KTM in 14th, but he felt that he could have been not far from the pole position fight.

"It was a shame, after a long time struggling, [in] conditions that usually I can feel good, was good to play almost the pole position I think today," said Zarco. "I missed the Q2, I was really on fire inside."

"Sad, disappointed and angry immediately after Q1 because we missed the strategy. Not about the slick tyres, for sure what Valentino did was very clever, but even with the rain tyres I felt that I can go faster.

"But when I went into the box I left with the slick, I came back in then it was too late do something."

When pressed on whether he felt he would've had a shot at pole in Q2, Zarco said: "Yes, I say it because is tricky condition and I have the experience from the Moto2 and also MotoGP. When is not full rain and not dry enough for slick. I can go pretty fast.

"Just in Q1 on the first tyre I did not do everything perfect but I was quite competitive. With second rain tyre I knew it was possible to do at least qualifying in Q2 - and then, finally the laptimes we were doing [in Q1], they were also competitive for pole position [in Q2].

"Don't forget that the target is to be on top and when we have a day something is possible, you must trust and have this target."

Zarco added that in mixed conditions he was able to feel some strong points with the RC16 bike for the first time.

"It is also first time since the beginning I am on the KTM that I feel some strong point on the bike.

"This give me a smile and back good motivation to feel that what we do, it is working. 14th tomorrow and the best for the race."