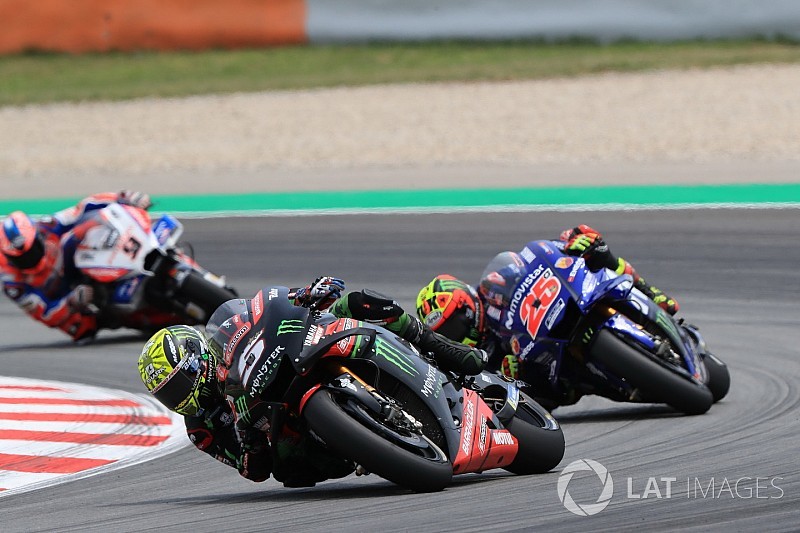 Tech 3 Yamaha MotoGP rider Johann Zarco says he "doesn't want to know" what improvements the factory Yamaha riders have made since the start of the year.

Although Yamaha is enduring its worst winless streak of the MotoGP era, works pair Valentino Rossi and Maverick Vinales enjoyed their most competitive outing in 2018 at the Sachsenring, finishing second and third.

Zarco, meanwhile, could manage no better than ninth at the German track, continuing a tough run of form in the last few races that has resulted in him slipping from second in the championship behind Marc Marquez to equal fourth heading into the summer break.

Asked about the gap to the factory Yamahas at the Sachsenring, the Frenchman replied: "It's better I don't think about that because what I have [the bike], I will keep [until the end of the season].

"[Being in a] factory team means [there are] many people working on many things and, maybe small details that they can control better.

"Let's see, I began [the season] quite strong but now when you check the differences, sometimes they are so small, that is what makes the race more difficult or the practices also more difficult.

"In laptime, the gap is small. I don't want to know too much, I know that the less I think [about it], the better I go, so I keep that spirit.

"I am happy that also I am feeling good during the race, just some little pace is missing. I hope we, as soon as we catch it, also everything will become much easier."

Zarco denied, however, that his best chance to win his first MotoGP race has slipped his grasp.

"No, this light is still on," he said. "Maybe [it's] like a tunnel where I am now, but I still see the light and I never say not, the victory, and as long as I am racing I will keep it in mind."

The high point of Zarco's season arguably came when he scored pole position for his home race at Le Mans, only to then crash out while fighting for the lead the following day.

Asked about the difference between his current situation and the French GP weekend, Zarco highlighted the nature of the Bugatti Circuit layout as well as his high motivation to perform for his public.

"Le Mans was a good track for the Yamaha, first of all," he said. "Then still [it was the] beginning of the season, second race in Europe... maybe the others are still not at this high level, and the motivation was also high.

"I remembered what Vinales did the year before so I [knew I] could [be] there and I was strong in mind to do it.

"Now if I compare what the factory did last year here [in Germany], I am finally maybe better, or not that far. It is just at the end of the race they are a bit faster.

"As I say, a small thing would make a big difference. So I keep trusting I will find it."