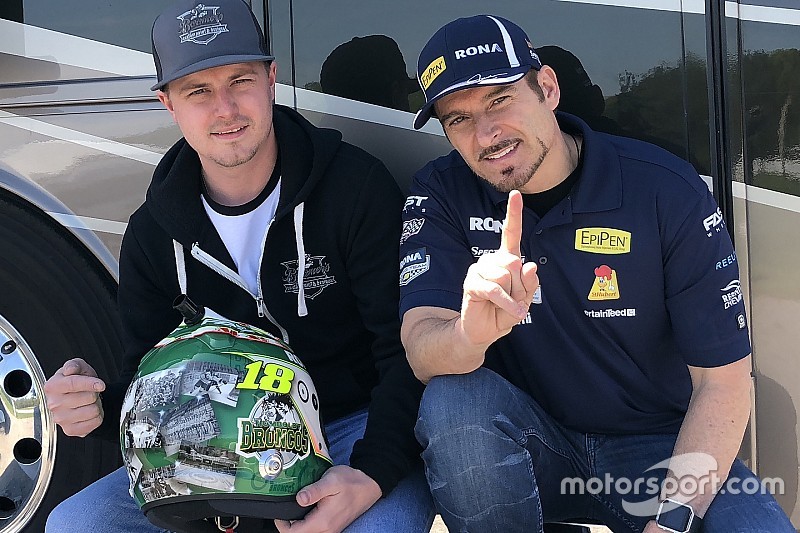 Although over $15 million dollars has already been raised for the victims of the April 6 bus crash that killed 16 people and injured another 13 in one of the worst national tragedies in Canadian history, Tagliani wants to do his part to help support the families.

The Quebec driver will wear the specially designed helmet this weekend in the season opener for the NASCAR Pinty’s Series at Canadian Tire Motorsport Park. Tagliani partnered with good friend Dustin Hudema to design a helmet with images of members of the Humboldt team on the helmet.

The veteran racer will wear the helmet in the season opening Clarington 200 and will later sell the helmet with proceeds going to the families of the deceased and surviving players.

Tagliani, who has often been involved in charitable activities throughout his driving career, was affected by the incident just like all of his fellow Canadians.

“I just wanted to try and do something to help these families and let them know that we care and are still thinking of them,” he said.

Tagliani plans to contact businesses and people in Saskatchewan and throughout Canada who might be interested in purchasing the helmet to help raise more funds to be donated to the families.

“I’ve always tried to find ways to help people throughout my career and this is something that I wanted to do to try and help these families,” said Tagliani. “We hope to raise money through this sale and I want to personally deliver the helmet to someone later this year when we race in Saskatoon later this summer.

“I wanted to do something that was one-of-a-kind and relevant.”

Hudema works at Design by Boomer and he designed and painted the unique helmet to honor the entire Broncos team and organization for Tagliani’s fundraiser.

Tagliani joins fellow Pinty’s Series driver DJ Kennington as the second driver to organize a fundraiser for the victims’ families and survivors of the accident.

Kennington and his NASCAR Cup Series team, Gaunt Brothers Racing, designed a hood that was used on the car he raced at Bristol Motor Speedway in April . After the race, the team auctioned off the hood and with proceeds going to the fund.

NASCAR Pinty’s Preview - Who will replace Labbe as Champion?