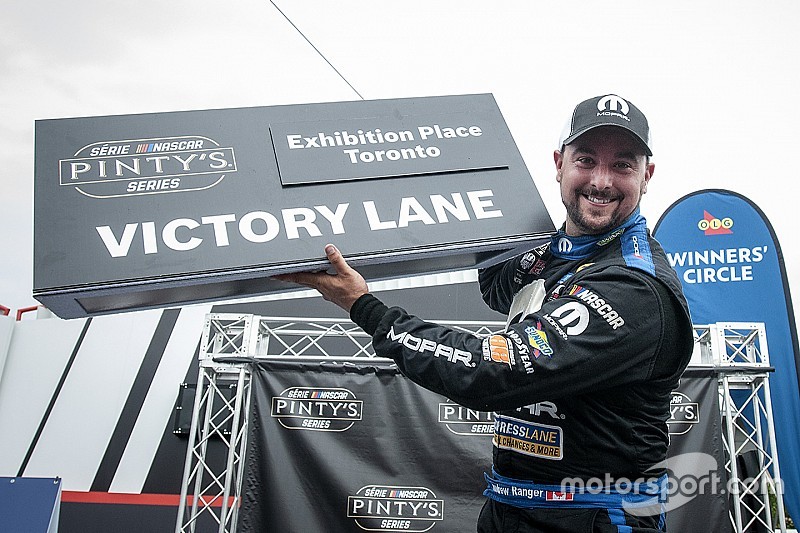 Veteran driver adds to his record for wins with late pass by Alex Tagliani to capture the Pinty’s Grand Prix of Toronto.

After crashing out in the early going of this race last year, Andrew Ranger wanted to make sure he was around to have a chance at the win this time around.

Ranger was able to make a brave pass by Tagliani on the final restart of the race in NASCAR Overtime to win the Pinty’s Grand Prix for a record third time Saturday afternoon at Exhibition Place.

The Roxton Pond, Quebec native also made it two wins in a row now in the NASCAR Pinty’s Series and he adds to his series record with his 24th win.

“On the last restart he (Tagliani) opened a door for me to get in the inside and I drove in very, very deep (in Turn 1) and it worked,” said Ranger. “It was my only chance to pass him because he was so fast and I wasn’t able to pass him anywhere else on the track.”

Tagliani won the pole award in qualifying on Friday and was out front during the entire race up until the final restart when Kevin Lacroix brought out the fourth and final caution flag of the race after he hit the wall and suffered heavy damage to his car near the end of the scheduled 35-lap event to force the extra distance.

Tagliani was still happy that he was able to finish this race this year.

“It’s really unfortunate we couldn’t get the car to Victory Lane but it’s one race I’m really happened we finished second,” said Tagliani. “(The leader) is a sitting duck as you’re basically showing the guys the breaking zones and they brake just a little bit later and I would have done the same thing.

“I’m just happy to finish second and we salvaged a great points day and it could have been worse. I think the team did a great job (today).”

J.F. Dumoulin finished third for his first podium finish since 2015 with Gary Klutt and L.P. Dumoulin rounding out the top five.

With his second consecutive win, Ranger is now tied with L.P. Dumoulin with 167 points although leads by tiebreaker of two wins versus Dumoulin’s one win so far this season.