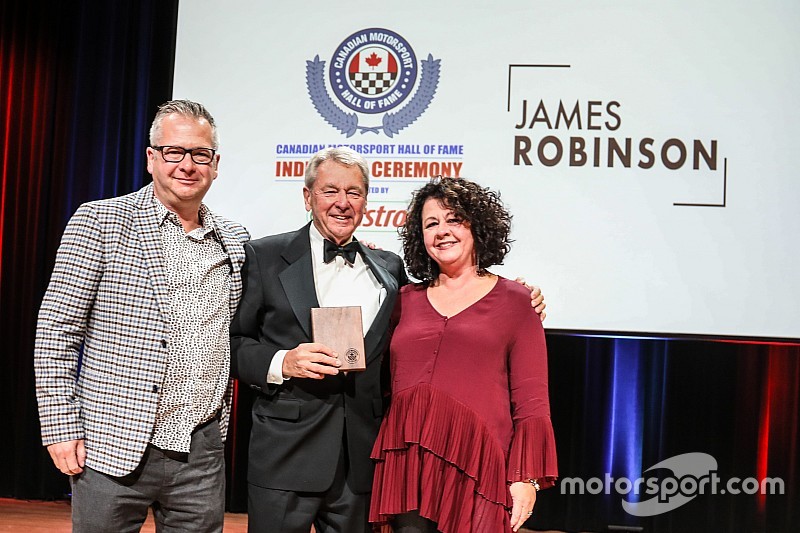 It was a who’s who of Canadian racers, organizers and partners inducted into this year’s class during a ceremony Saturday evening at Canadian Broadcasting Corporation’s Glenn Gould Studio in downtown Toronto.

Canadian Motorsport Hall of Fame chairman Dr. Hugh Scully and master of ceremonies and legendary motorsports reporter Norris McDonald kicked the evening off before the eight inductions into the 2018 class.

Villeneuve, who joined his late father Giles in the hall, was recognized for his accomplishments that included winning the 1997 Formula One title along with the 1995 Indianapolis 500 and the 1995 CART championship.

Kennington joined his father Doug - who was inducted in 2004 - as the second father-son combination to become members of the Canadian Motorsport Hall of Fame.

The younger Kennington won series crowns in 2010 and 2012 and still competes in the NASCAR Pinty’s Series and holds the record as the only driver in the history of the series to start every NASCAR-sanctioned event.

“True honor to be here tonight, I never dreamed in a million years I would wind up here when I started racing go karts when I was five years-old,” said Kennington. “My journey has been an awesome one.

“We’ve come a long way from Delaware Speedway. My whole career has been presented by Castrol  and I wouldn’t be here today without them. To have won two championships and partner with them for 25 years that’s almost unheard of in this sport.”

In addition to his accomplishments in his home country, the St. Thomas, Ontario native has also competed frequently in NASCAR national series as well in the United States.

“To come from there to run two Daytona 500, it’s not just me, I’m just the lucky guy that gets to drive and have my name up on the board,” said Kennington. “My dad, everybody knows, is my hero. My dad said I git here much sooner than him but the only reason I did was because of him. I wouldn’t be here without you.”

Scott Steckly, a four-time NASCAR Pinty’s Series champion, was the first inducted during the evening. He last competed in the series as a driver in 2015, but has since continually fielded cars for championship contenders such as fellow CMHOF member Alex Tagliani, Donald Theetge and Marc-Antoine Camirand.

Robinson was instrumental in broadcasting motorsports in Canada and his legeacy continues today with his son Joel, continuing to produce not only all NASCAR Pinty’s Series broadcasts throughout Canada, but various motorsports events every year.

Also inducted was Jim Tario who has been instrumental in bringing and keeping the Honda Indy Toronto event in the city on the street course for several decades.

Francois Dumontier joined Tario for induction thanks to his efforts in promoting the only Formula One race held in the country in Montreal for several decades.

Honda Motor Company was also recognized and up-and-coming Canadian racer Nicholas Latifi was recognized with the Rising Star Award by the organization.