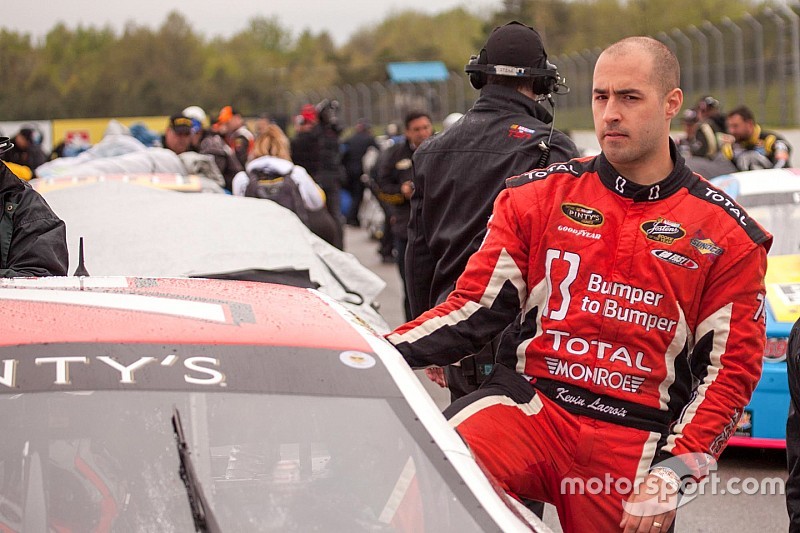 Although it wasn’t the dominating performance he had during his first win at Circuit ICAR in 2015, Kevin Lacroix made it a NASCAR Pinty’s Series win to remember in the final laps in the Ecko Unlimited 75 on the road course in Mirabel, Quebec.

Lacroix was third on the final restart of the race on Lap 77 in overtime behind leader Marc-Antoine Camirand and Alex Tagliani.

The Saint-Eustache, Quebec, native was able to pass Camirand in Turn 1 and hold off a hard-charging Andrew Ranger to score his second win of the season and also second at the facility located just outside of Montreal, Quebec.

Camirand came home third with Alex Labbe fourth and Tagliani, who started the race from the pole and led the most laps, finished fifth.

The race was slowed three times by caution with the final yellow given to the field on Lap 73 when Elie Arseneau and J.F. Dumoulin both stopped on the track to set up the NASCAR overtime for the Canadian Touring Series.

Lacroix, who also won the season opener at Canadian Tire Motorsport Park in May, retakes the points lead win his second road-course victory of the year over Labbe.

A trio of NASCAR next drivers dominated the headlines in the Busch North Throwback 100 with Chase Purdy winning the pole and Todd Gilliland leading the majority of the race. However, it was Harrison Burton who celebrated at the end of the night.

Burton was able to get past Gilliland on Lap 75 and went to cruise to his fourth NASCAR K&N Pro Series East win of the season taking the Busch North Throwback 100 at Thompson Speedway Motorsports Park.

Purdy won the pole for the event that featured many teams displaying throwback paint schemes of former NASCAR Busch North competitors and champions and led the first 15 laps of the race.

Gilliland made the pass for the elad and remained out front until Burton got alongside Gilliland on Lap 72. The duo raced side-by-side for three laps until Burton was able to complete the pass.

The race was slowed four times by caution with Burton holding on to his points lead over Gilliland who is trying to win both the K&N Pro Series East and West championships.

Getting to know Larry Jackson: 'I always admired Junior Hanley'