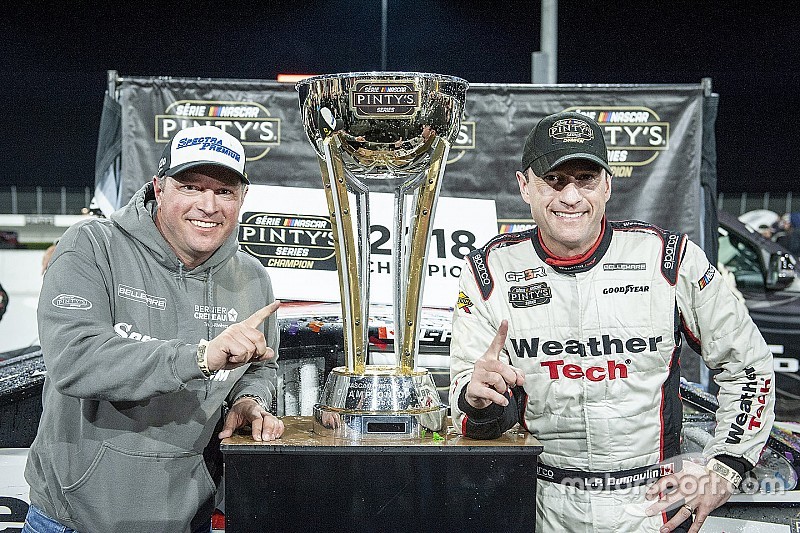 Dumoulin won the Clarington 200 last season taking the lead on the final lap after contact between race leader Kevin Lacroix and Andrew Ranger opened the door for the veteran.

The Trois-Rivieres, Quebec driver used the momentum from the season-opener to propel him into the points leader where remained in the top three all season.

The third generation driver is looking forward to racing at the 3.957-km road course this weekend.

“CTMP is a very smooth and fast road course and I’ve always enjoyed racing there,” said Dumoulin. “I’ve been going there when I was a kid with my dad and brother and I also raced Formula Ford (1600) there and love that place.”

Dumoulin enters the first race of the 2019 season as one of three drivers to compete on Sunday that have three wins at the historic track located just outside of Toronto.

Lacroix and Ranger are the other two drivers with three wins there highlighted by Lacroix’s three consecutive victories in the fall race in 2016 and sweeping both races in 2017.

“I love the atmosphere at CTMP as the track management put on a great event and the fans really support our races there,” said Dumoulin. “Fans come out in big numbers to camp, cookout and watch our races. It’s a fun time and I know I speak for all the drivers in saying we really appreciate the support of the facility and especially the fans.”

WeatherTech Canada and Bellemare have been long supporters of Dumoulin and his race team and it’s because of their dedication, the driver and his team continued in the offseason to improve their team.

“I have the greatest sponsors in the world and they have been a great help to our team for years and they really believe in us,” said Dumoulin. “When we won the title last year we celebrated for a bit and then went right back to work to make our cars even better for this season.

“We brought out entire operations in house a few years ago and by doing that we are able to be hands on and work as much as we can on our cars.”

After scoring his first eight series wins on road courses the only thing missing from Lacroix’s resume besides a championship was a win on an oval track.

Last season Lacroix’s two wins came on oval tracks and that has his confidence to contend for a title at an all-time high.

“This season is different,” said Lacroix. “In the previous years, I didn’t achieve great results on oval tracks, so I would focus on winning on the road courses. However, we found the winning recipe on both types of tracks so we have to have a strategic approach to each race.”

In addition to the two wins by the Bumper to Bumper sponsored driver he added six top-five and nine top-10 finishes. He also led the most laps in 2018, with 789.

“We have a different attitude towards the 2019 season,” Lacroix said. “We are much calmer and we feel more ready than last year. We were dominant, but now we have to put our efforts towards not making any mechanical mistakes. On my side, I have to be clever. With these elements under control, we have less pressure and we will have a championship-winning team.”

Tagliani ready to contend for title

If not for some back luck Alex Tagliani might have won the title last year and he’s ready to go for it again.

Tagliani was runner-up to Dumoulin last season and won at CTMP in the most recent race there last August.

The veteran appeared to be on his way to winning the season opener one year ago before bad luck struck his team.

“In last year’s season opener at Canadian Tire Motorsport Park, I was leading the race with three laps to go when the car suffered a mechanical breakdown,” said Tagliani. “In the August round, we won the NASCAR Pinty’s race. So, I have a great feeling about this year’s opening race.

“It’s very important to start the new season on a strong note so that we don’t end up chasing the points leader all season long like we did last year following a disappointing finish in the first race of the season.”

Like Dumoulin, Tagliani is excited on all the work his race team - 22 Racing - has put into their cars during the offseason.

“Something also new for Team 22 Racing #18 Chevrolet EpiPen/RONA/St Hubert is that we will now be using a new Spectra Premium radiator that will give us better performance,” Tagliani added. “We are ready to fight for the championship with all our might and I am eager to start the season.”

Coming off a career-best sixth-place in the Pinty’s Series standings last year and picking up his first win, Marc-Antoine Camirand is ready to get back in the race car.

Camirand is hoping to improve on his finish last year driving the No. 22 GM Paillé Chevrolet and feels everyone racing on a new tire will help him and his team.

"The new tires bring everyone back to square one,” said Camirand. “It should change a lot of the adjustments of the car and the strategy we are going to adopt. I hope we can take advantage of the fact that we are three drivers on the team to learn more quickly how to work with these new tires.”

NASCAR Roundtable: What to expect in the All-Star race