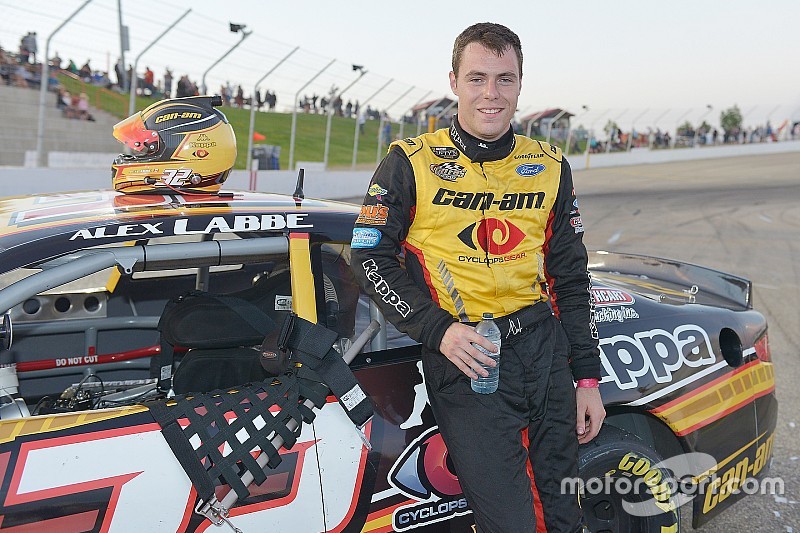 Alex Labbe almost passes out in Victory Lane after holding off D.J. Kennington in a green-white-checkered finish in Velocity Prairie Thunder Twin 100s race No. 1, while Lapcevich scored his second win of the season in the nightcap.

Alex Labbe gave everything he had to beat D.J. Kennington Wednesday night at Wyant Group Raceway and it showed in Victory Lane.

After passing Kennington for the second and final time in the race on Lap 75 it appeared he had the win secured until a late caution set up NASCAR overtime.

Labbe, who also won on an oval earlier this season when the NASCAR Pinty's Series made its return to Delaware Speedway in June, had to hold off Kennington one last time after a spin by Jason Hancewich in Turn 2 on Lap 97 brought out the fifth yellow flag of the race.

Labbe got a good jump on the restart and was able to score his third series win. After stopping in Victory Lane he nearly passed out from exhaustion.

"I'm okay now but I think I just let my emotions get the best of me and I jumped out of the car too quickly and felt a little dizzy," said Labbe. "I'll be fine. I'm just happy to get the win and help bring us closer in the points standings."

Defending series champion Cayden Lapcevich rebounded from being involved in an early caution on Lap 40 to finish third. Donald Theetge and Gary Klutt rounded out the top five in the first race.

After finishing on the podium, the NASCAR Next driver came full circle at the track where he won his first series race one year ago en route to becoming the youngest champion in series history.

Lapcevich started fifth in the second 100-lap race and remained in the top five throughout the race until he moved into the second spot and eventually passed Kennington on Lap 78 for the lead.

It was Lapcevich’s fifth career win.

"We had a great car and I just drove it as hard as I could to get past D.J.," said Lapcevich who called his mom from Victory Lane to let her know he won. "I can't thank my dad and the team for all they did today to help us get this win."

Labbe followed up his win in the first race with a solid third-place showing in the second event with Kevin Lacroix fourth and L.P. Dumoulin fifth.

Lapcevich and Labbe have scored all the oval track wins while Kevin Lacroix, who entered the night as the points leader, has won all the road course events this season.

The series remains in western Canada this week and will race in the Luxxur 300 at Edmonton International Raceway on Saturday.