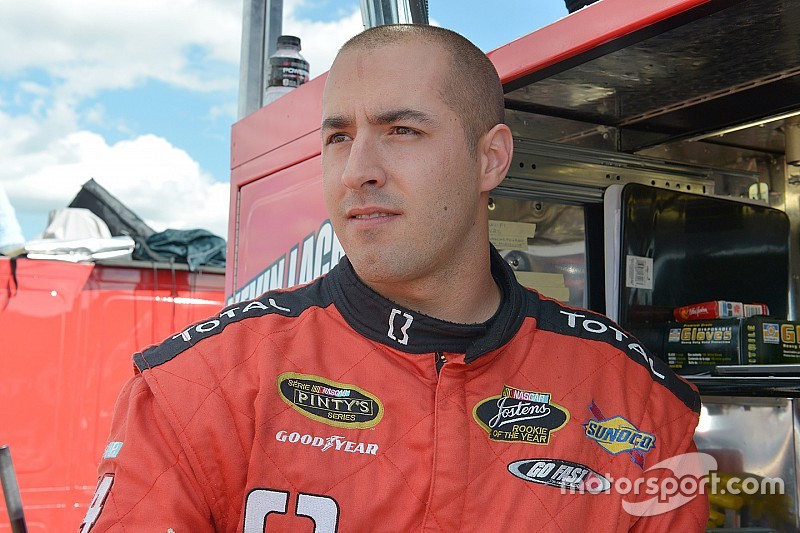 Kevin Lacroix took the lead on Lap 7 and held off a pair of charges by Marc-Antione Camirand and L.P. Dumoulin to score his second straight NASCAR Pinty’s Series win and seventh of his career Saturday in Toronto.

Lacroix started third. He was following Andrew Ranger and Alex Tagliani when they made contact in Turn 5 on Lap 5. Tagliani was given a drive-thru penalty for the incident as Ranger handed over the lead to Lacroix.

For Lacroix, who won last week at Circuit ICAR following a controversial finish on the last restart, the victory was one of the biggest of his career.

“I seem to always to get the best out of myself and my car winning these bigger races here in Toronto and in Quebec at Trois-Riviere,” Lacroix said. “It’s good for our confidence and more importantly, the points standings. Here I don’t think I had the car to win but it was very, very good for sure.”

Former NASCAR Pinty’s Series champion L.P. Dumoulin scored his first runner-up finish since the fall race at Canadian Tire Motorsport Park last year. He had a good car but could not keep up with Lacroix on the final restart with three laps to decide the race.

“The only thing I wanted to do was get to the outside on that final restart,” said Dumoulin. “I don’t think we had the car to win today and we were struggling with the set up a little yesterday. The car was okay on a longer run.”

Adam Andretti put on a show throughout the day. Despite qualifying fourth in his NPS debut, Andretti started at the rear of the field for being late to the driver’s meeting. By Lap 32, Andretti restarted fourth and passed Alex Labbe for the podium finish.

“What an honor to be a part of this great series with great competitors,” Andretti said. “NASCAR has always done a great job of putting these things together and it was a lot of fun to be out there today.

“Don’t be surprised if you see me back here in another race before the end of the season.”

When the race restarted on Lap 9 following the second caution for Martin Cote’s contact with the wall, Lacroix and Marc-Antione Camirand pulled away from the pack by over one second and battled for the lead.

Camirand made hard contact with the tire barrier in Turn 4 as he attempted to make a pass by Lacroix on Lap 29, ending his chances to get his first series win.

Ranger returned to the field and finished 15th and Tagliani came home 14th after suffering mechanical issues late in the race.

The race was slowed three times by cautions with Lacroix maintaining his lead in the championship standings with the victory.

The series will now turn west for its annual trip to Wyant Group Raceway in Saskatoon, Saskatchewan on July 26th and Edmonton International Raceway in Alberta on July 29.