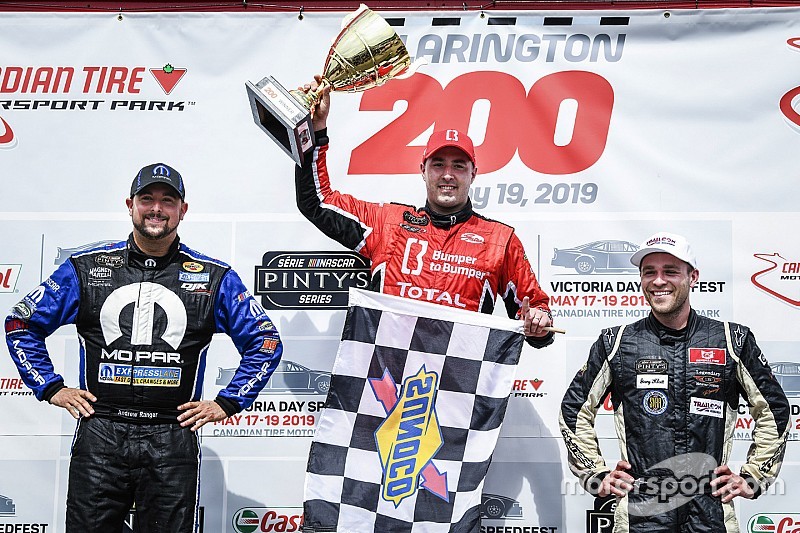 Kevin Lacroix scored his fourth win at Canadian Tire Motorsport Park since 2016 to get the 2019 NASCAR Pinty’s Series underway with veterans taking the top-five spots.

Lacroix and Andrew Ranger kicked off season with another impressive performance for the Canadian-based NASCAR series.

Lacroix moved into second place in all-time Pinty’s Series wins at CTMP with his fourth victory in the past six races while Ranger and a talented field of veteran drivers completed the top five on Sunday.

Ranger, who has three wins at CTMP, picked up his ninth top-five finish on the road course with Gary Klutt, defending series champ L.P. Dumoulin, and Jason Hathaway rounding out the top-five.

Ranger, who pitted with teammate DJ Kennington for tires near the halfway point of the race, felt that might have helped determine how good his car was in the end to challenge Lacroix.

“It turned out in the end that the strategy we tried, it might have been a bit too early for us to stop,” said Ranger. “I tried to get by Kevin (Lacroix) again, it was a bit like last year but I didn’t want to take too big a risk, he did a good job so we have to settle for second place.

“It’s a good start to the season to get second place points, good for the championship.  I want to thank all the guys for a great job, the whole Mopar team, my crew chief Dave Wight and all our sponsors.”

Dumoulin began the defense of his second Pinty’s Series championship with a strong top-five finish.

Dumoulin led some laps in the season opener and worked his way through heavy traffic late in the race to come home fourth at CTMP.

“Our WeatherTech Canada/Groupe Bellemare No. 47 car handling was right on the money,” Dumoulin said. “All the development and testing work carried out over the off-season paid off in full. Our pit-stop strategy did not work out as we expected, but it was a team decision. We had a good race, there was a lot of action and we are satisfied with our finishing position.

“Our objective this year is to win another championship and a fourth-place finish with our race-winning car is more than encouraging for the next races.”

Hathaway, along with new team partner Kubota Canada highlighted on his No. 3 Chevrolet, qualified ninth and finished an impressive fifth in the Clarington 200 at CTMP.

The veteran who know has the second most starts in the history of the series with 125 starts brought his car home fifth and was all smiles after his impressive return.

“We had a great race in our brand new Kubota race car,” said Hathaway. “Man, I had a blast all weekend behind the wheel again. This is going to be a fun season.”

Kennington brought his No. 17 Castrol Edge Dodge home in eighth-place and continued his record as the only driver to start every race in the history of the Pinty’s Series with his 148th consecutive start.

Kennington was happy with his team worked together and improved throughout the weekend.

“For so much to be brand new the whole team did a great job preparing the car,” said Kennington.  “We got better each time out during practice. Great job all weekend by the Castrol Crew though, we had a little bobble on the right rear during the pit stop, but they hustled and sorted it out.

“It was great to have so many race fans here this weekend, this event that Castrol and CTMP put on just keeps getting bigger every year, amazing.”

After running as high as fifth in the race, the Sun Peaks, British Columbia, native came home with a top-10 performance.

Since signing on with Canada’s Best Racing Team (CBRT), White has been impressed with the team’s performance.

“Right from the first test in our No. 21 Powder Ventures Excavating Dodge and through this entire weekend we kept getting better every time out on track” said White. “Knowing the kind of speed we have gives a driver a lot of confidence.

“So happy to be working with the CBRT group, huge thanks to everyone. Larry (Jackson) and I worked so well together, I’m really looking forward to getting back to an oval at Jukasa Speedway in a couple of weeks.”