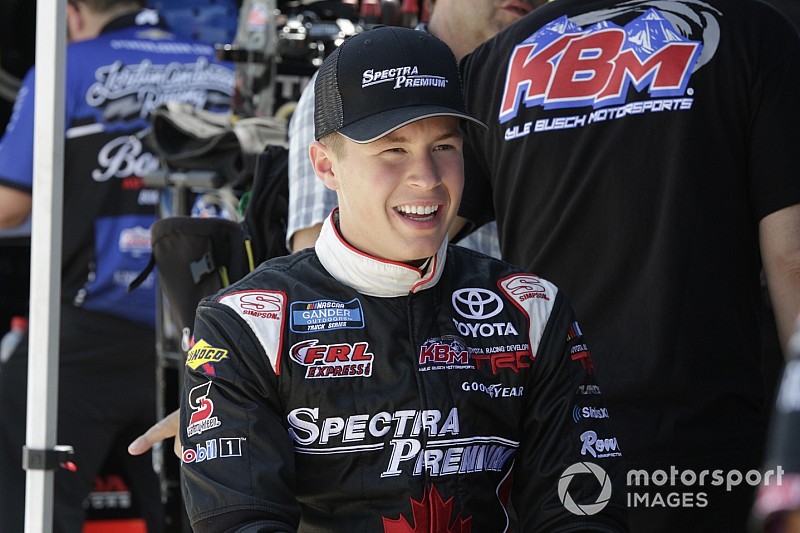 The month of June is one Raphaël Lessard will never forget no matter how far he goes in his racing career.

After scoring his first top-10 finish in the NASCAR Gander Outdoors Truck Series earlier this month at Iowa Speedway, Lessard topped that accomplish by winning in his first NASCAR Pinty’s Series start.

The St. Joseph de Beauce, Quebec, teenager took the lead on Lap 137 and remained out front the rest of the way to win the rain-shortened Budweiser 300 at Autodrome Chaudiere.

The Toyota Racing Development driver passed his teammate and defending series champion L.P. Dumoulin and held on to score the surprising win.

“It's (the win) very special, it's kind of a dream come true,” said Lessard. “I never expected to win my first ever NASCAR Pinty's Series race here at home, a major event with all the great drivers who have been here over time.

“The guys at Dumoulin Competition gave me an awesome race car. It's hard to dominate like this with a one-race deal. It's your first time with the team, with the car and everything is new.”

Lessard also added that his car actually got better as the race went on past halfway.

“I wasn't sure how the race would play out,” Lessard said. “In practice we were okay on new tires, but we needed a little more speed. And on old tires, we just kept being better and better. I had to pace myself to slow down.

“It was a lot of fun, I can't thank enough the Dumoulin Competition team for the awesome car, my partners Sociétés Louis Jacques and FRL Express, brothers Jean-Francois and Louis-Philippe Dumoulin, and everyone on the team.”

Kevin Lacroix, who won the season opener last month and finished second on the podium at Jukas Motor Speedway in the second race of the season, followed Lessard at the finish to continue his best start of any Pinty’s Series season.

“We always have a hard time here and we were targeting top 5 maybe top 6 and we would’ve been really happy,” Lacroix said. “And now second place, top contender. Everything is very nice for us, we’re really happy, gaining a lot of points, taking the points lead.”

Alex Labbe scored his best series finish since he returned to full-time competition coming home third after starting from the pole with Andrew Ranger and Alex Tagliani rounding out the top five.

Alex Tagliani scored his second top-10 finish of the season in sixth, followed by Brett Taylor’s best series finish in seventh. Brandon White raced from a lap down to finish eighth with Simon Dion-Viens and Donald Theetge completed the top 10.