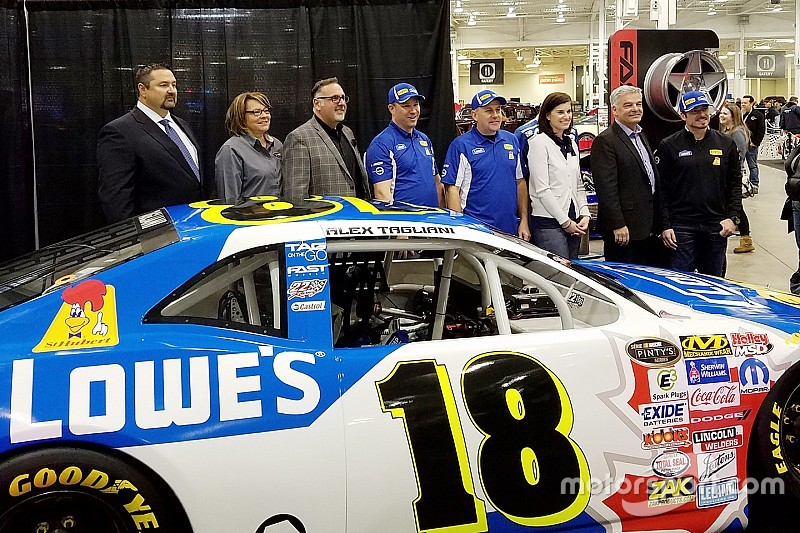 NASCAR Pinty's Series veteran, Canadian Alex Tagliani announced Saturday morning that he will sport the colors of Lowes alongside Epipen on his car during the 2017 season.

Tagliani, who finished third in the standings last season after missing the season opener to compete in the Indianapolis 500, unveiled his new car number and colors during an announcement at the Motorama Custom Car Show in Toronto.

Tagliani has scored five wins in the NASCAR Pinty's Series in 45 starts with 17 top-five and 28 top-10 finishes.

The Quebec native made the announcement along with Sylvain Prud'homme, President and CEO, of Lowe's Canada.

"I've done a lot of wonderful things in my career and this one tops a lot of things," said Tagliani. "In this sport sponsors are everything and to find one that fits for you in important. To have a brand like Lowe's join our team is great for the NASCAR Pinty's Series and NASCAR Canada."

For Prud'homme, the partnership is one he's looking forward to moving forward with Tagliani and NASCAR's only sanctioned touring series in Canada.

The car will look very familiar in design to the No. 48 driven by seven-time Monster Energy NASCAR Cup Series champion Jimmie Johnson.

"I mentioned earlier this week that it was tough to hold on to the secret about this announcement," said Prud'homme. "Everybody in our organization is excited we've been to announce this new partnership with Alex and his team ."

In addition to competing in the series, Tagliani has also competed in the Indianapolis 500, as well as the NASCAR Xfinity Series and others throughout his car and that was noticed in this new deal.

"Alex is a well-known racer throughout Canada and North America and that it's such a natural fit for us to partner with him and his team. It's just a natural match to partner up with NASCAR Alex and Lowes and we look forward to watching him compete this summer."

Canadian drivers to compete in 2017