That streak started in early April at Martinsville (Va.) Speedway just as the NCAA Men’s Basketball tournament was wrapping up and just as Major League Baseball’s regular season – which reaches its All-Star break marking the ceremonial midpoint of its 162-game regular season – was just getting underway.

Fifteen consecutive weekends is quite a number for Patrick, for whom 17 races encompassed an entire season when she drove in the IZOD IndyCar Series before heading south to NASCAR. Now, 15 races is just a stretch in the season as, following Sprint Cup’s traditional mid-July off weekend, the series competes in another 17 consecutive races before crowning a champion in November.

It’s all part of the adjustment Patrick, driver of the No. 10 GoDaddy Chevrolet SS for Stewart-Haas Racing (SHR), has made moving from IndyCar to NASCAR. 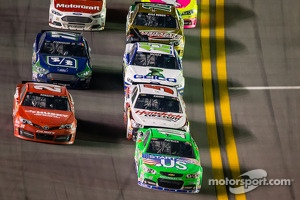 The 15th and final consecutive weekend of this season’s current run takes place at New Hampshire, the 1.058 mile track in Loudon that Patrick has competed at twice in the NASCAR Nationwide Series and once in the IndyCar Series. She finished 14th in last year’s Nationwide Series event and sixth in the 2010 IndyCar race.

While New Hampshire is still relatively new to Patrick, for her crew chief Tony Gibson, it’s a place he’s been to many times. In fact, he’s been there every time. He’s worked as a crew member in all 36 Sprint Cup races conducted at the track. He was there for the first one on July 11, 1993, working as a crew member of Jimmy Hensley’s car, which started 13th and finished 11th. The team was still technically owned by the late Alan Kulwicki but was in the process of being purchased by Geoffrey Bodine.

While Gibson knows his driver doesn’t have the Sprint Cup experience of Gordon or Newman, he’s hoping a solid run will give the team momentum heading into the rare off week.

“We had a good test at New Hampshire last month. It’s obviously helpful to get track time, especially at a place I’ve never been in a Cup car. It’s a challenging place, for sure, but I’m happy we got some extra track time there and hopefully we can have a good run with the GoDaddy Chevy.”

Restarts have been a topic of conversation recently. Can you talk about how you’ve improved on restarts and how they might compare with IndyCar? 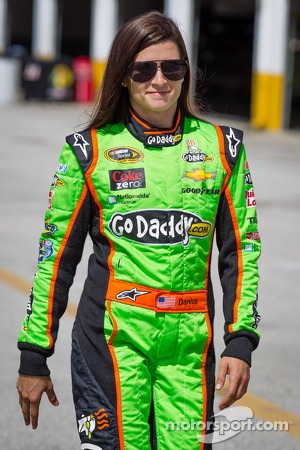 “As far as me and the restarts go, I feel like they are getting better and better. A lot of it has to do with the car, sometimes. If it’s really tight or really loose on a restart, there is just nothing you can do about it. You’re just hanging on. So, you tend to not have as good a restart in those situations. But there are other ones where, man, I’ve passed five cars and I’m having awesome restarts. So I feel like I’m actually having those days now. That’s very important, especially this year with how important track position has been. That’s where you can make up the most amount of ground. It’s challenging to pass. It’s really tough to pass. So, that’s good. Now, the difference between IndyCar and NASCAR starts are totally different. I think it’s hard for people to understand just how quickly Indy cars accelerate. In NASCAR, it’s really just about turn one. In IndyCar, it’s just about who gets flat (out) first. That’s the whole restart. It’s who can get flat first and anticipate that, even jumping the start on some. There’s a lot of jumping the start that goes on in IndyCar, I feel like. In NASCAR, there is a penalty for it. But it’s been this way for a long time, so it’s a much more organized start and I feel like it leads to a little bit more of kind of putting yourself in the right place at the right time and understanding how each lane works and where you might need to go. Sometimes at a track, the outside lane is really where you want to be and, sometimes, it’s the inside. So, I’m always hoping to get in the right line. In IndyCar, it gets a lot more spread out a lot quicker and it all happens right on the initial start, when the green comes out or, as I said, maybe just before.”

You’ve finished on the lead lap in five consecutive races and scored two top-15 finishes in the last four races. The GoDaddy team talked about small steps at the beginning of the year. Do you feel like you’re making progress?

The GoDaddy team tested at New Hampshire June 25 and 26. How will that help the team as you return for the race weekend?

“The test went really good. The first day was her kind of learning the track and learning the Cup car. We struggled a little bit for speed on the first day. The second day, she got up to speed pretty good and was only a tenth or a couple tenths off the fast guys, so we felt better about it and she felt much more comfortable. It ended up pretty good. We’ll go back in qualifying trim since we did test there. Hopefully, we’ll be able to just work on qualifying and get a good starting spot.”

The team finished 12th in April at Martinsville, another flat track, but one that is only a half-mile. Are there any similarities that will carry over to the 1.058-mile track at Loudon?

“It’s the same type of rhythm. There’s a lot of straight-line braking and trying to roll the center. The forward drive is not as critical as at Martinsville as the rolling speed is a lot faster. But, a lot of characteristics of the track are the same, just a little bit bigger, obviously. It’s the same style of driving to get around there.”

You were working at the first Sprint Cup Series race at Loudon in July 1993 and have been to every race conducted there. Talk about your first race there and what you remember.

“I was there with Jimmy Hensley as the driver and Geoff Bodine was in the process of buying the team since Alan (Kulwicki) had been killed earlier in the year. It was a nice little racetrack. I’ve always loved Martinsville and it was real similar to that. I thought it was a really cool, really neat racetrack. I’ve been fortunate to run really well there and been with some great drivers. It’s probably one of my better tracks because it kind of fits my style of set-up stuff. It’s a really cool track and I loved it the first time I saw it. I’m looking forward to going back there and I’m glad we race there twice.”