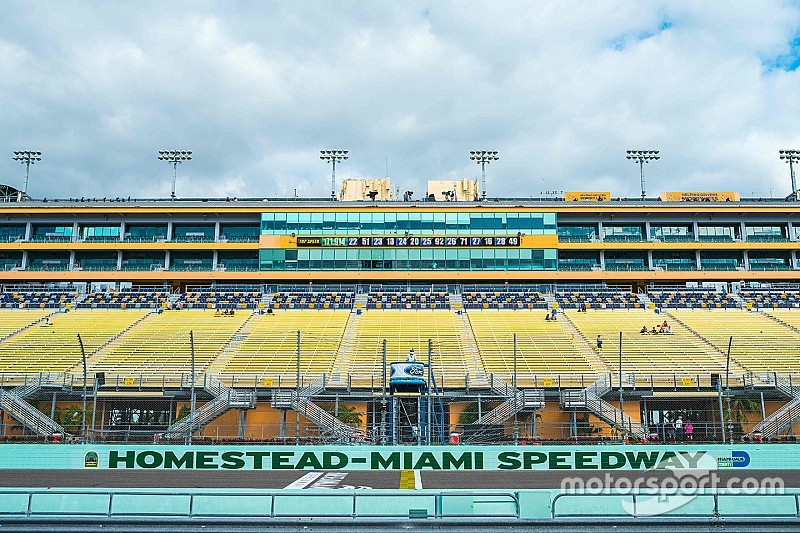 Tracks react to the alterations NASCAR has made to its Cup Series schedule for the 2020 season.

On Tuesday, NASCAR announced a major shake-up to its Cup Series schedule for the 2020 season, which includes a change of venues for the both the regular season finale and the title-decider in November.

Heres a look at how the tracks reacted to the news:

“NASCAR's 2020 schedule is a product of unprecedented collaboration from so many stakeholders in our sport, but the most important were our fans. We’ve taken a tremendous amount of fan feedback to create a schedule that maintains the tradition of NASCAR's biggest weekends in our sport, while also adding some wrinkles the fans will love, particularly as we look ahead to the playoffs.

“Starting the season in Daytona and the back-to-back May weekends at Charlotte continue to anchor the first-half of the season, followed by a two-week break mid-summer that will give drivers, crew members and teams the opportunity to recharge before a final push toward the playoffs. Fans should appreciate a historical return to Labor Day for Darlington to start the playoffs. Throw in the unpredictability of Daytona to end the regular season, the Charlotte ROVAL and two short tracks for playoff bracket-busters, plus a change in venue for championship weekend and you’ve got the ingredients for some wild NASCAR racing in 2020 that both traditionalists and fans looking for a change-up will enjoy.

“From a Speedway Motorsports perspective, we’re pleased to kick off the early season ‘west coast swing’ at Las Vegas with the second race of the year, then welcome fans back to the Southeast to a warmer mid-March date at Atlanta. Texas, Bristol, Charlotte, Sonoma, Kentucky and New Hampshire continue to hold similar race weekends on the calendar through July, then we’ll amplify the intensity even more for the Night Race at Bristol as it moves to September as the cutoff in the first-round of the playoffs. Las Vegas moves later in September to a cooler race weekend in the desert, and the ROVAL returns to Charlotte’s more traditional mid-October weekend as the cutoff race of the second playoff round. Texas will cap our NASCAR SMI season with a playoff tussle a week earlier in advance of the local hunting season."

"This is a very exciting day for Martinsville Speedway,” Martinsville Speedway President Clay Campbell said of the race under the lights.  “It’s a question we’ve gotten from fans literally every day since we installed the lights and we are now able to say, ‘May 9, 2020.’ So, this is a very exciting day for everyone involved ... Fans showed us that they support night racing here during the last two ValleyStar Credit Union 300 weekends,” Campbell said. “We hope they will enjoy the Cup Series under the lights just as much and will come see us next May.”

Regarding Martinsville becoming the penultimate race of the season, Campbell added, “We are going to move to one of the most important races on the schedule, setting up the Cup Series finale. Recent history has shown us that drivers will do whatever it takes to secure a spot in the Championship Race, and now the urgency and intensity will go to another level, as it’s the last shot for teams to have a chance at the championship.”

Ralph Sanchez’s vision for our track more than 25 years ago was to host spring racing and be a major part of South Florida’s March calendar,” said Homestead-Miami Speedway President Matthew Becherer.  “Miami has historically hosted many popular events during March, including the Miami Open, the Florida Derby, Ultra and the Calle Ocho Music Festival, among others, and this move will integrate us into this impressive mix.  A March race weekend affords us many unique opportunities to entertain the South Florida community as we host NASCAR races for many years to come.”

"The Coke Zero Sugar 400 will continue to be one of the cornerstone events on the NASCAR schedule and will now serve as the final race of the regular season,” Wile said. “Daytona International Speedway strives to deliver the most exciting racing for our fans and this date change adds another layer of drama and excitement with a potential walk-off home run moment for a driver to solidify a playoff berth."

"To be able to host our Labor Day throwback weekend as the first race of the NASCAR Playoffs will create tremendous excitement and enthusiasm for our fans,” said track President Kerry Tharp. “Darlington Raceway, considered one of the toughest tracks on the circuit, will definitely challenge the drivers right from the start of the postseason. To combine our throwback weekend, which celebrates the sport’s past, present and future, with the initial start to the championship run, should provide plenty of additional excitement, and energy to the entire weekend."

"The fall date change solves the issue we've dealt with since 2005 in that it gets us off the traditional early November opening week of the Texas general hunting season," said Texas Motor Speedway President Eddie Gossage. "That's a big issue for a key faction of our race fans so this should please all the white-tailed deer hunters who couldn't make it out to the track. Now they can so we're looking forward to them joining us for our new Oct. 25 race date."

"There's no better venue to throw a massive party for our nation's birthday than the Racing Capital of the World," IMS President J. Douglas Boles said. "Fourth of July weekend is a celebration of patriotism and getting outside in the summer with family and friends, and a Big Machine concert and NASCAR racing at the Speedway combine those two traditions, making for a special Independence Weekend celebration! A record 47 million Americans were estimated to have traveled on Fourth of July weekend in 2018, and we're confident that this new date and a host of fun activities on and off the track at IMS will help draw more fans to our venue and build on the buzz surrounding last year's enhanced schedule. We're looking forward to a can't-miss holiday extravaganza for Hoosiers and sports fans everywhere."

“This is a big win for our Speedway and its fans,” said AMS Executive Vice President and General Manager Brandon Hutchison. “Our fans have been asking for a warmer race day, so taking the opportunity to move our race weekend into spring was a no-brainer.

“When March 15, 2020, rolls around the flowers and plants around our facility will be blooming and our fans will be enjoying warmer, more inviting weather as we celebrate our 60th year. It’s going to be great!”

With all of the stakeholders that are involved in assembling the NASCAR schedule – it is a difficult task to meet everyone’s needs. However, it is always with a ‘fan-first’ mentality that the schedule is produced,” said Mike Tatoian, Dover International Speedway president and CEO. “Moving our second weekend into the end of the summer should allow more families with young NASCAR fans to visit us before the school year begins, and we are for the most part removed from the crowded professional and collegiate sports landscape in the fall.”