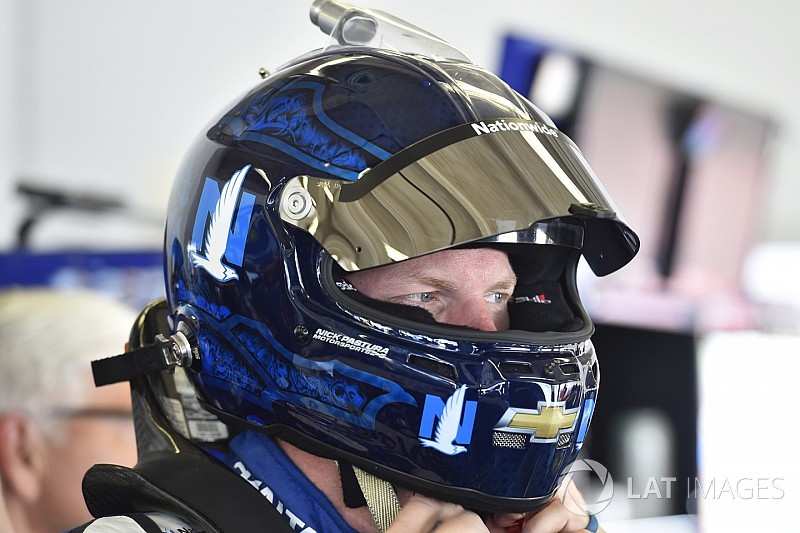 From a birthday present fit for a King to title contenders, the Motorsport.com NASCAR team weighs in on the hottest topics in stock car racing this week.

Kevin Harvick became the latest driver to punch his ticket to the 2017 NASCAR playoffs with his win at Sonoma. Do you think he has the ability to contend for the championship this season in his first year driving for Ford?

Jim: Absolutely. Since Kevin Harvick and Rodney Childers were paired at Stewart-Haas Racing, they have been one of the most consistent performers in the Cup series. Even the off-season change to the Ford camp hasn't slowed the No. 4 team in any appreciable manner. With the tracks that make up the playoffs, I have full confidence Harvick will once again be a player for the championship.

Lee: Harvick has been a contender all year. Everything just fell into place for the No. 4 Stewart-Haas Racing team on Sunday. Harvick and his crew have endured its share of misfortune — and certainly, there are areas to clean up before the playoffs. But this team will be ready for battle for the final 10 races.

Nick: Harvick is without a doubt a title contender. Sonoma may have been his first win, but don't let that fact confuse the facts. He's been fast all year. The No. 4 team has one of the highest average finishes this season and only three drivers have led more laps than him.

Tim: Ever since Harvick teamed up with Rodney Childers at Stewart-Haas they’ve proven to be championship contenders every season and I see this year as no different. I think he’ll make it to Homestead-Miami Speedway as one of the final four drivers unless mechanical issues arise or has terrible luck in the playoffs.

Dale Earnhardt Jr. makes his final scheduled Cup start Saturday night at Daytona International Speedway. How big would it be for him to win Saturday and do you think he can do it?

Jim: A victory at Daytona would certainly be fitting for Earnhardt, who has won two Daytona 500s and amassed most of his Cup series wins at NASCAR's superspeedways of Daytona and Talladega. Throw in the fact it is also the track, Dale Sr. lost his life, and Earnhardt reaching the playoffs with a win at Daytona would be an epic storyline for NASCAR. While I don't think Hendrick Motorsports has been as good lately at Daytona, the circumstances of restrictor-plate racing certainly benefit one of its masters.

Lee: Earnhardt is capable of winning every time he rolls into a restrictor plate track, where he’s won 10 of his 26 career Cup victories. However, since winning this race from the pole in 2015, he’s wrecked in his last three starts. While he recovered last July with a 21st-place finish, Earnhardt wasn’t as lucky in the last two Daytona 500s. A win for Earnhardt anywhere would be huge — but particularly in the next 10 races to ensure a playoff berth.

Nick: It would be a magical moment for both him and the sport. Any time he wins at Daytona, it's special due to his family's history at the famed track. But beyond that, it would also be huge for his season. He comes into this race 22nd in points and in desperate need of a victory. Without a win, it's going to be very difficult for him to qualify for the playoffs.

Tim: I think Earnhardt can win at a restrictor plate track anytime he’s in the field and Saturday will be no different. While I don’t think his July 2001 win at Daytona could ever be topped, I think if he were to win Saturday in Daytona. I’ll be able to hear the roar from fans at the track all the way back home in North Carolina. But I’m sure the happiness from NBC and NASCAR executives will be just as big if he wins and qualifies for the playoffs.

Richard Petty turns 80 this week and while his driver is still recovering from his accident at Kansas, how special would it be to see Darrell Wallace Jr. score an upset win on Saturday and do you think they can do it?

Jim: It would be huge for the King and for Bubba Wallace, but I haven't seen anything from Richard Petty Motorsports so far this season that would indicate they are on the verge of winning a race. However, I may well have said the same thing when Aric Almirola won this race for RPM in 2014. So, the circumstances provide Wallace a better chance than anywhere to make it happen this season.

Lee: The King couldn’t ask for a better birthday present than a win for the No. 43 Ford. Richard Petty Motorsports earned its last win in this race with Aric Almirola in 2014. Restrictor plate tracks have a tendency to produce surprise winners, so it would not be shocking to see Bubba roll into Victory Lane on Saturday night. However, it’s tough for rookies to find dancing partners at Daytona and Talladega. Wallace will have to enlist some drafting help to pull off the upset.

Nick: This would be huge for several reasons. You have The King's team scoring a win on his birthday weekend, a substitute driver at the wheel and it would be the first win for an African-American driver at the Cup level since Wendell Scott in 1964. As for can he do it, why not? If you're in the race, you have a chance when it comes to these plate races. And just three years ago, that No. 43 won this very race with Almirola.

Tim: I think this could be one of the biggest wins in the history of the sport for Richard Petty as a car owner. It’s not beyond the realm of possibility that Bubba Wallace can win, but he’ll need some help. His best friend, Ryan Blaney, has already won this year and he could be one to help his friend get the win. A win or solid finish will hopefully help Wallace find a ride for the remainder of the year when Aric Almirola returns to the No. 43 car.

William Byron finally scored his first NASCAR Xfinity Series win on Saturday at Iowa Speedway. Do you think he could be in the running to replace Dale Jr. in the No. 88 car next year? Or would it be too soon for the teenager?

Jim: These days it's hard to say what defines "too soon" to move to NASCAR's biggest series. The driver would certainly never think so. While I believe Byron has some development to make in the Xfinity Series, there is still more than half a season remaining, including the possibility of a championship. If he does move up next season, I'd expect to see Byron in the No. 5.

Lee: I think it’s too soon to make that call. While Byron has enjoyed a solid season, he trails his veteran JR Motorsports teammates in the Xfinity Series standings. Yes, he came close on winning at Michigan and just fell short to Cup regular Denny Hamlin. However, the field at Iowa Speedway was quite thin. There’s still plenty of racing for the 19-year-old to make his case. Chase Elliott had two successful seasons in NXS, won a title and has yet to win at the Cup level.

Nick: With most drivers, I'd say too soon. But Byron strikes me as one of the talents that could adapt without any major issue. He has risen through the ranks incredibly fast and was unstoppable in Trucks last season. He hasn't lit the world on fire in the Xfinity Series, but he's been solid and consistent. But will he be in the No. 88? Not sure, but that may not be the only Hendrick ride up for grabs in 2018...

Tim: I think William Byron has the talent to succeed at any level in NASCAR. I think we could be seeing the next version of a Jimmie Johnson type personality on and off the track, but I also think it would be too early to put him in the pressure cooker that is the Cup series. I would keep him in NXS for this season and at least 2018 as well. I would expect him to make a spot Cup start or two next season.

John Hunter Nemecheck scored his second straight win in the NASCAR Camping World Truck Series last Friday night at Iowa. Do you think he could make it three in a row at Kentucky Speedway next weekend?

Jim: Not may saw the first one coming, and I doubt many saw the second. Clearly, then, a third is likely a pretty good bet. John Hunter has typically been strong at the intermediate tracks and if the past two races are any indication of the momentum behind his team, I wouldn't bet against another win at Kentucky.

Lee: Possibly. Earlier this season John Hunter finished third at Kansas Speedway. But his talent often outshines the competitiveness of his trucks. Aerodynamics play a large part at intermediate tracks and that will certainly be the case at Kentucky Speedway. He’ll have to bring his A-game once again to race at the front among the higher dollar trucks.

Nick: When a driver is put into a corner when winning goes from a 'want' to a necessity, they can do spectacular things. John Hunter is a stellar driver and he has a small, but hard-working group of guys behind him in that family-run organization. I'd put some money on them doing it again.

Tim: I think he’ll face a tougher challenge at Kentucky Speedway, but as we’ve seen before, when a driver gets some confidence and on a roll anything can happen. I think he could win at Kentucky for sure, but he’ll need some things to fall his way to make it happen next weekend.

Drivers to watch in NASCAR's second Daytona Cup race of 2017