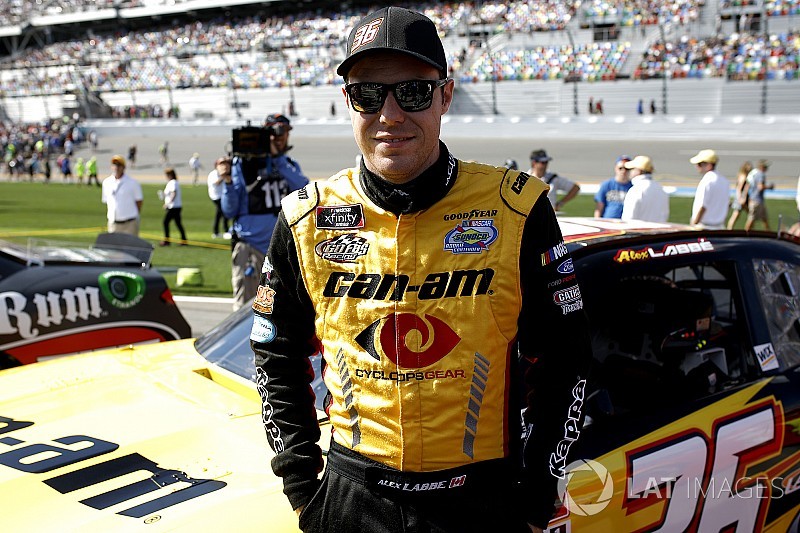 Canadian drivers competing in NASCAR’s three national series is nothing new. In fact, over 75 Canadians have made starts in at least one of the national series since Allen Heath became what is believed to be the first to start in what is now Cup Series race in 1951 at Carrell Speedway near Gardena, Calif.

The Saskatoon, Saskatchewan, native would go on to make four career starts and pave the way for Canadians ever since while Calgary, Alberta, native Trevor Boys, holds the record by any Canadian with 112 national series starts between 1982 and 2009 (102 Monster Energy NASCAR Cup Series, three Xfinity Series and nine NASCAR Camping World Truck Series).

This season, two recent NASCAR Pinty’s Series champions have made competing in the states a regular occurrence with 2017 champion Alex Labbe competing full-time in the NXS for rookie of the year honors, while two-time champion D.J. Kennington has already made three starts in the first six Cup races of the season. He plans to attempt a couple more before the 2018 Pinty’s season begins in May.

Labbe, who was running in the top seven late in the season opener at Daytona before he ran out of gas and ended up 24th, is the first driver to compete full-time in a NASCAR national series since Boys.

While Labbe is getting noticed early this season sitting 16th in the point standings he joins another Canadian who received a lot of recognition recently – Strathroy-Caradoc, Ontario, Canada native and crew chief Cole Pearn – who won the 2017 NASCAR Cup Series title with driver Martin Truex Jr.

The recent performance by Labbe, Kennington and other Pinty’s Series competitors is something that has been noticed by NASCAR Vice-President and Chief International Officer for NASCAR, Jim Cassidy.

“Since its inception in 2007, the NASCAR Pinty’s Series has grown into the premier motorsports series in Canada,” said Cassidy. “We’ve seen the series become a legitimate stepping stone for Canadian drivers and crew members looking to compete at the highest level of NASCAR.

The continued success of Canadians in NASCAR – including champion Monster Energy Series crew chief Cole Pearn and 2017 Pinty’s Series champion Alex Labbe – has been a tremendous boost for NASCAR racing north of the border.

While Labbe and Kennington might be the two most recent drivers to compete, Kennington feels there many more in the Pinty’s Series who have the skills to compete and contend for wins in the U.S.-based series.

“I would put Andrew Ranger in any high-performing team’s car and he’s got the skill and talent to win, especially on a road course,” said Kennington.

Prior to the duo competing this year, most recent starts by Pinty’s Series drivers have been on road courses with Alex Tagliani building the most impressive resume to date with three runner-up finishes in the Xfinity Series in eight starts with four poles.

Kennington adds racing on different short tracks and road courses throughout Canada only helps the drivers from his series when they do get an opportunity.

“We race almost over the entire country of Canada or different road course and ovals and that experience is something I feel is unique in the Pinty’s Series because we do race on so many different types of track that we are better prepared to compete,” he said. “I think what Alex and (car owner and crew chief) Mario (Gosselin) have done so far is really impressive.”

For sponsor Pinty’s Delicious Foods, based in Burlington, Ontario, the opportunity to showcase drivers from its series only helps everyone associated with racing in Canada.

“It’s really awesome to see of the NASCAR Pinty’s Series homegrown talent like (Alex) Labbe and (D.J.) Kennington move from the national series in Canada to the NASCAR national series,” said Pinty’s Vice-President of Marketing & Research for Pinty’s Delicious Foods Tony Spiteri. “We’ve also seen drivers from our dirt tracks to compete and be successful in the NASCAR Camping World Truck Series like Stewart Friesen.

“Seeing these drivers and crew members have success in the national series only helps grow the sport internationally and that’s good for all of us involved in NASCAR.”

Canadian fan support for the two Pinty’s Series and the annual Camping World Truck Series races at Canadian Tire Motorsport Park – featuring crowds of over 30,000 for both events – is something that Cassidy realizes.

“Canada has some of the most passionate NASCAR fans around the globe, and they have truly embraced the Pinty’s Series and its competitors,” Cassidy said.

Labbe will compete in the NXS race at Texas Motor Speedway this weekend while Kennington is slated to make his first Cup Series start at Bristol (Tenn.) Motor Speedway on April 15.

Editor's note: Earl Ross is the only driver to win a NASCAR Cup Series race winning at Martinsville Speedway in 1974.