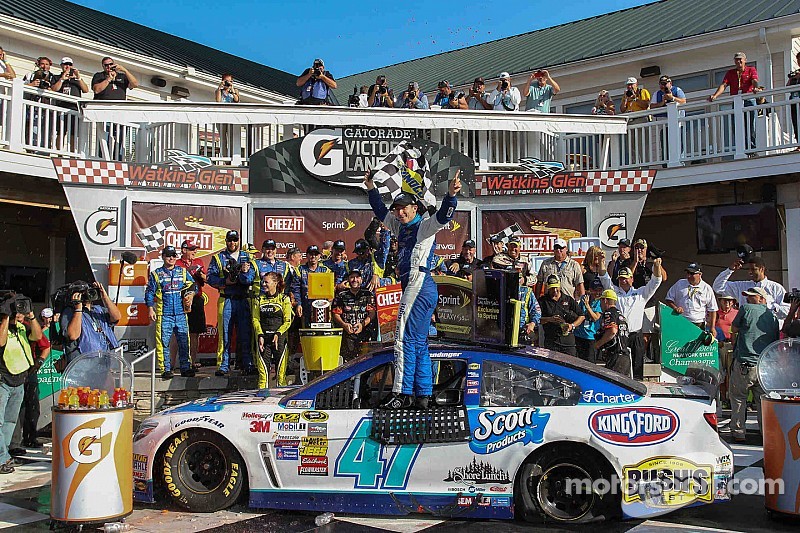 The Road to Recovery program didn't end for Allmendinger when he walked out those doors. In fact, it had only just begun.

In this story, we won't be mentioning Tony Stewart, Kevin Ward Jr., or even Sprint Car racing in general. It's time we took a moment to focus on the feel-good story from Watkins Glen that has sadly been overlooked. Yes, I'm talking about the epic battle for the win that saw A.J. Allmendinger give JTG a spot in NASCAR's version of the playoffs.

A.J. Allmendinger was forced to go through NASCAR's Road to Recovery program after he tested positive for amphetamines, due to the ingestion of Adderall in the summer of 2012. The journey since that day has been quite a wild one for A.J.

A.J. Allmendinger was driving for Team Penske after getting the break of his career in the 2011/2012 off-season. After his suspension,  he wouldn't sit behind the wheel of a Cup car until three months later at Charlotte, driving the underfunded No. 51 James Finch entry. He finished 24th, four laps down.

A.J. Allmendinger was now known as that guy who failed a drug test. But, he was also known as the guy who went wheel-to-wheel with sports car legend Allan McNish and did not blink, ultimately defeating the famous international racer to win the 2012 24 Hours of Daytona. He returned in 2013 to finish third in the same race, further proving he still had the skill to get it done.

Last year, he ran half the Sprint Cup schedule for smaller operations, never earning a top ten finish and failing to lead a single lap. For A.J. though, this would be one of the biggest years of his career. Let me explain...

2013 would mark Allmendinger's return to Team Penske, but not in a Cup car however. Roger gave him a shot in a Nationwide car in the two road course races. A determined A.J. Allmendinger refused to let anyone stop him from showing the world that he still belonged in NASCAR.

Roger Penske would employ A.J.'s efforts in another form of racing too; IndyCar. More specifically, the Indianapolis 500. Allmendinger, who was years removed from his glory days in CART, shocked everyone, running stronger than teammates and IndyCar superstars Helio Castroneves and Will Power.

Even after an unscheduled pit stop late, he rallied back to finish seventh, leading over 20 laps.

A.J. Allmendinger found himself a full-time ride in 2014 in the form of JTG's No. 47 Chevrolet SS. They've been around for years, never reaching Victory Lane and rarely cracking the top ten. It was a seat though, and A.J. wasn't about to pass it up.

Let me paint this picture for you. There's five laps to go at Watkins Glen and on the front row you have two drivers. Marcos Ambrose, an Australian V8 Supercar champion and one of the most talented road racers on the planet. A win puts him in the Chase in what may be his final year in NASCAR.

Then we have A.J. Allmendinger. A driver with success in open-wheels and sports cars, also a talented road racer, and knowing that a win puts him in the Chase too. Not only that, but it would be the first victory ever for both he and his race team.

Both wanted it, neither would back down.

The green flag drops and what ensues is a high-speed dance with disaster, filled with contact, and an unquenchable hunger for victory. They didn't care about wrecking or getting hurt. They were blinded with visions of a checkered flag; nothing else mattered at the time.

On a late restart, they went tearing through the esses side-by-side; something few would dare to do. They didn't stop there though. The two traded tire marks, slamming doors and simultaneously blocking the efforts of those behind them. This was their fight, no one else stood a chance.

The tandem went screaming through the dirt in the chicane at a high rate of speed with a handful of steering wheel and their elbows up. Ambrose takes the advantage but Allmendinger fights back off the final corner, diving to the inside. They enter the first turn and slam doors as Allmendinger tries to push his rival off the track. Then the caution flies and a GWC follows. Here's what happened next...